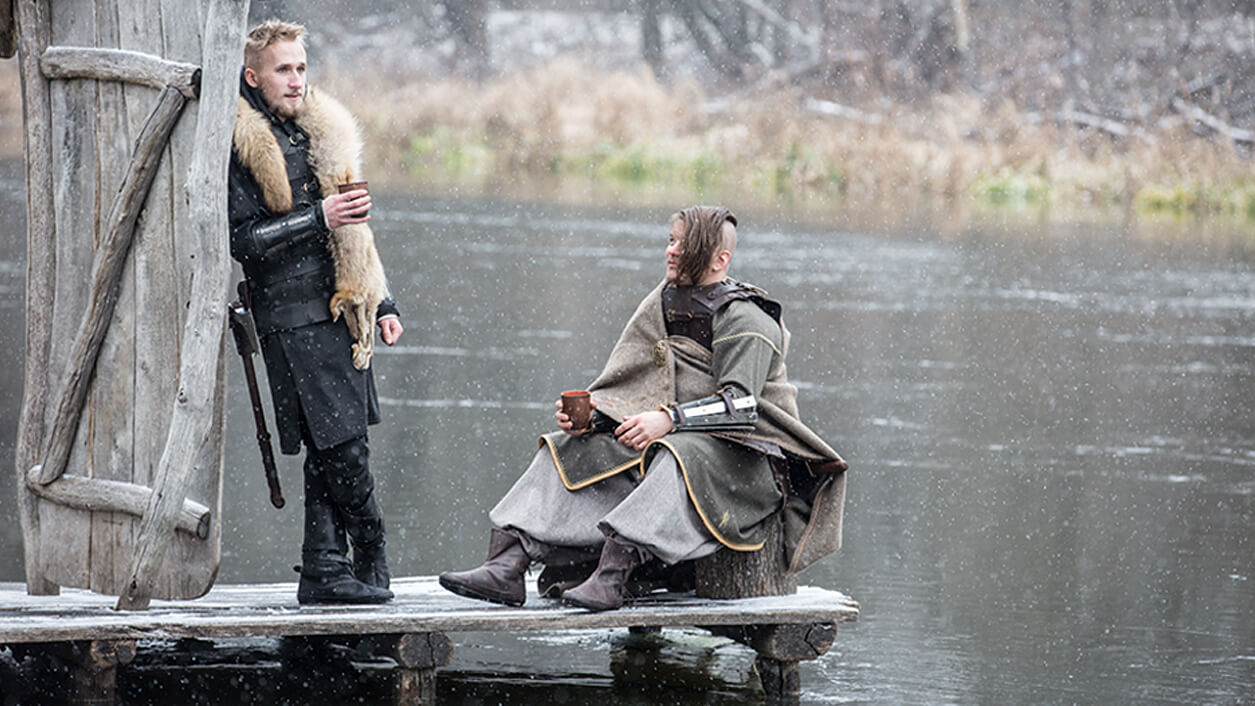 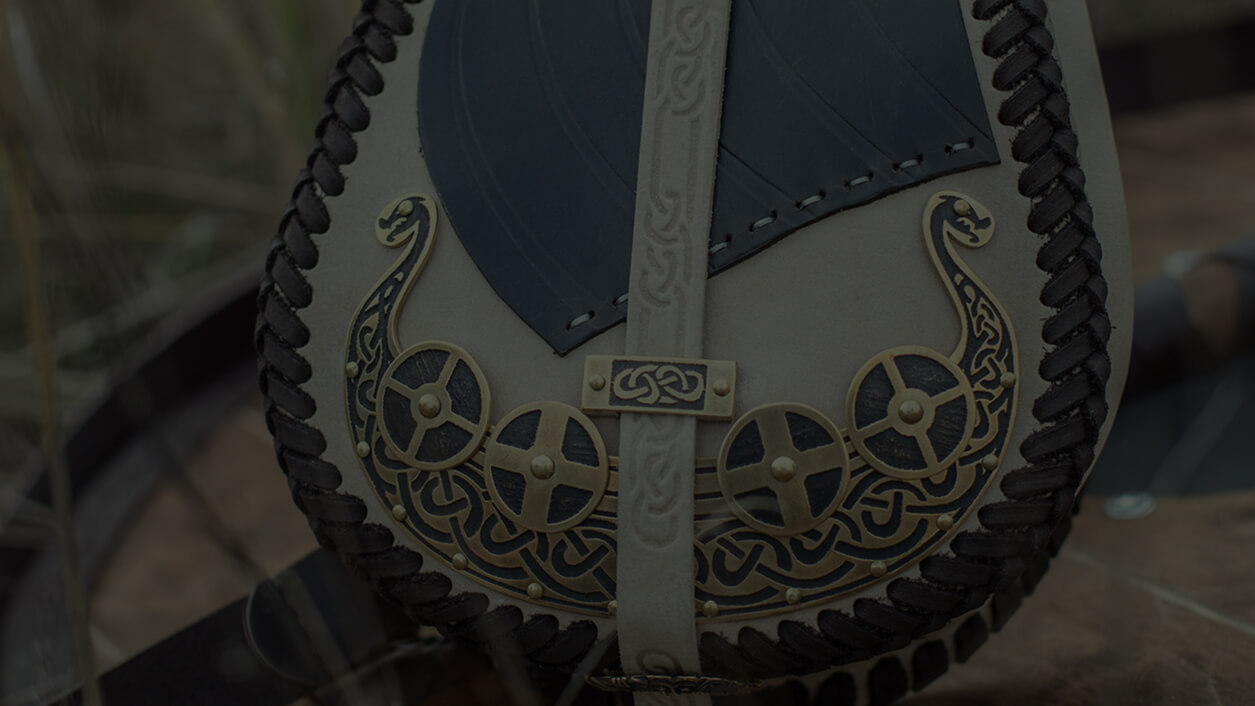 Our constantly growing collection of Viking clothing, armor and accessories contains everything you need for an epic adventure. Some items in our collection are made to imitate historical prototypes, whereas others were inspired by the age of the Vikings but designed by our talented craftspeople to create truly memorable fantasy pieces that will make a great addition to any costume.

Are you planning on voyaging through the wind and snow, or battling the high seas? Look no further than our cozy collection of Viking coats and kaftans, wool pants, tunics, hoods, and other accessories. No need to fear bad weather, we have even created a line of water-resistant clothing intended to shield you from the mist and rain.

If you are starting to worry about how to beat the summer heat and stay cool, calm and happy during the hottest months, we have you covered there as well with breezy linen clothing making use of the best of Viking design and our creative technology. Not only will you look fantastic, you’ll also be more comfortable than ever before!
If your Viking costume is starting to look good but still requires that little something extra to be complete, we have a comprehensive line of leather accessories, including gorgeously embossed belts, scabbards, decorative weapons, creatively designed pouches and more to keep you looking great whilst keeping to the dark ages aesthetic. We also have a decent line of boots and shoes that look great but also have the convenience of modern comfort.

Let’s not forget some of our most well-known work: our fantasy Viking armor. Natural leather is adorned with etched brass, solid rivets, and other materials to create coveted armor that is hard to miss. War belts, helmets and bracers are among some of our most popular items and can be seen on battlefields all over the world. No matter what you’re looking for, we promise that you’ll find something in our viking collection that will inspire you and your character!

The Vikings: An Age of Adventure

It is hard to deny that the Viking Age is one of the prevalent ages in pop-culture at the moment. Literature and films seem to be inundated with everything from mythology to Viking weapons, with History Channel’s Vikings, Marvel’s Thor and other movies inspired by Norse Mythology, and Tolkien being just a few of the famous works that take great inspiration from this fantastic time period.

But who were The Vikings, really?

When you use the word around some folk, they probably think of the big Vikings helmet with horns, but there is much more to it than that!

The Viking Age spanned from 793 - 1066 CE and came after an era of great migration. As people began to settle and communities began to grow, copious trade routes sprung forth from all directions, fostering an age of culture and discovery that still has a great impact today. Those trade routes brought new and exciting fibers and textiles that would help shape the style of the time period and make Viking clothing some of the most beautiful historical fashion to date. They also created a huge amount of distinctive Viking jewelry, either from casting or forging it, along with beautiful glass beads.

For those of you still hung up on the horned Viking helmet - let us clear it up for you! They were actually a dramatic, neo-classical piece of costuming created for opera inspired by an Iron Age helmet, which was nothing to do with Vikings! Ah, the joys of modern costume design…

Though Vikings are often referred to as a Scandinavian people, their intrepid nature took them all over the world, and Viking settlements can be found all over Europe, and even as far as North America! 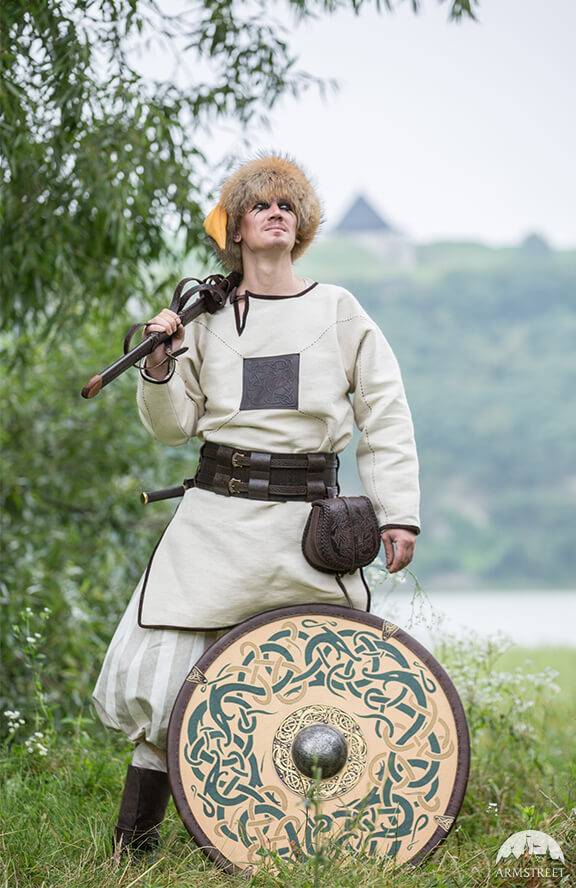 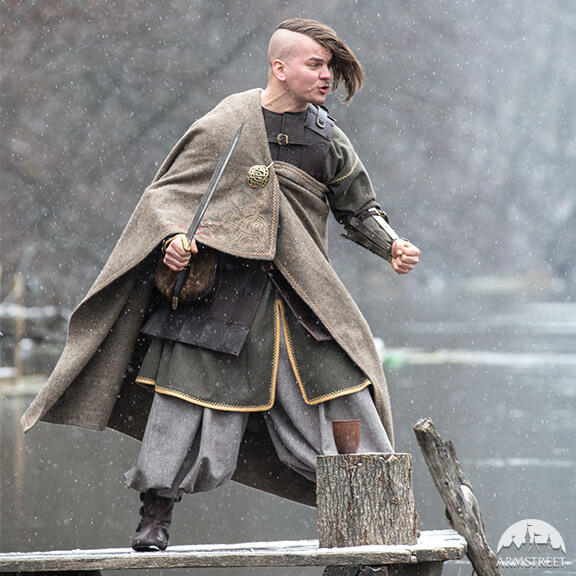 The viking tunic is more modern than you think…

Vikings are known for their ability to experiment with clothing designs, drafting many patterns that can still be seen in contemporary clothing - you may be surprised to see that the simple tunic is actually the base for many dresses in modern stores today!

Cloth wasn’t the only they wove, though - they also used tablet weaving to create a stunning braid that would adorn the edges and hems of their clothing. We took great inspiration from this when we designed our line of clothing, custom-designing a knotwork trim that makes use of modern technology whilst paying tribute to its tablet-woven roots.

This is your all inclusive shop

We have everything you need to make the ultimate viking costume that will go above and beyond a basic outfit. Our collection will help you take your ensemble to the next level, creating a realistic wardrobe that looks less like a costume and more like clothing. While a basic ensemble or a costume might just include a tunic and pants, we took a more holistic approach and built our collection from the ground up, using layers.

And there’s even more to add from there! Because we have so many items available and so many different colors to choose from, there is a ton of creative freedom to create an outfit that doesn’t quite look like any of the other viking costumes on the market and is unique to you but still within the theme.

Fine craftsmanship from start to finish

Everything in our collection is made from quality materials, using the best of our craftspeople to make sure each and every item is perfect. Many hours of careful design have gone into each item as well, which we take a lot of pride in! We are incredibly proud of our amazing line of clothing for women, which has become a bestseller for us. Everything from underdresses to warm woolen kaftans can be found, some plain and some embellished with hand embroidery and knotwork.

We also have a range of viking bags that can be used by both men and women, which use a range of exotic leathers and furs as well as our signature brass etching and fine craftsmanship.

We also love all of the shoes we have made to match our collections, and have even been known to wear them around the office and in our own homes. Our recently expanded footwear workshop allows us to make viking boots that look medieval, but have all of the benefits of modern comfort due to our expert craftsman who has years of shoemaking experience. 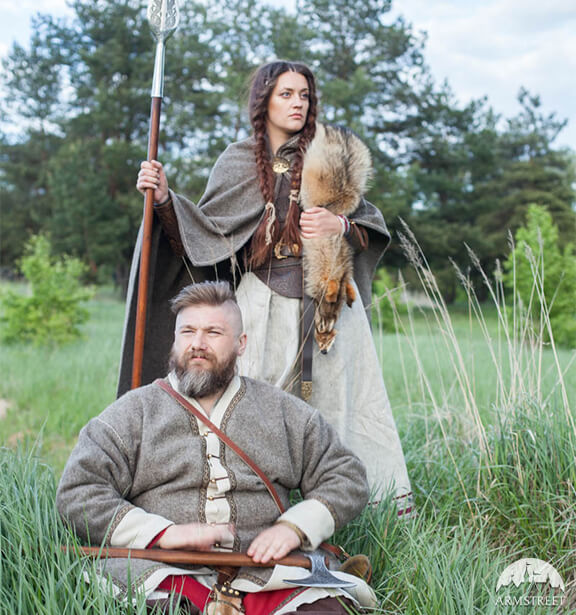 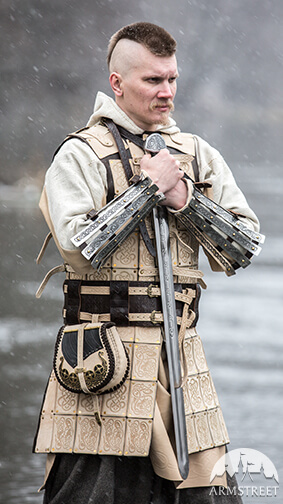 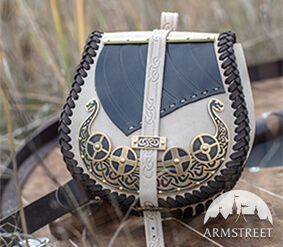 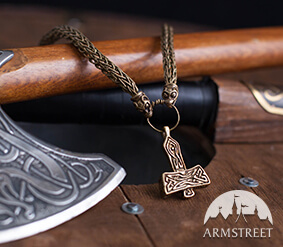 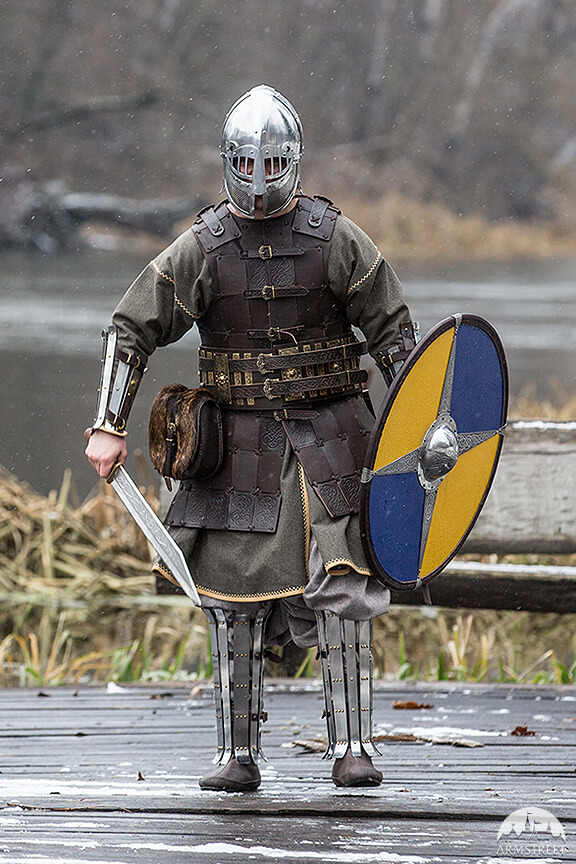 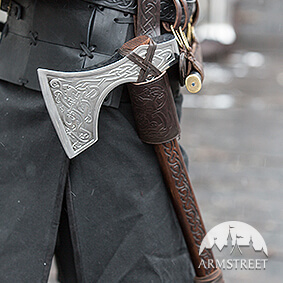 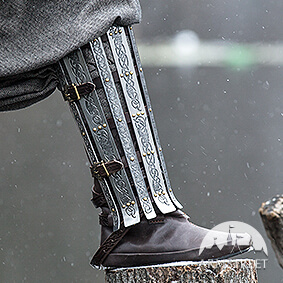 Be prepared for battle with viking armour

Something you shouldn’t overlook when putting together your kit is armor. We have designed an unparalleled range of viking-inspired protective gear, with everything from kidney belts to bracers to keep the most vital parts of your body safe. Made from quality natural leather and embellished with every technology at our disposal, we really hold nothing back when it comes to designing armor for this collection! We are proud of the number of stunning items we have created that may fall into the realm of fantasy, especially because we do truly believe that although there may not be historical references, they could have existed at the time with a little bit of imagination!

Equip yourself with the best viking weapons

On the topic of armor, you also shouldn’t forget about our excellent line of decorative weapons. If you are looking for a beautiful viking sword, we have a number of options based on historical examples that we’ve improved upon with our flawless etching techniques. Not only that, but we have crafted a number of perfectly fitted scabbards that are just as beautiful as the weapons themselves! If a sword isn’t your thing, what about a viking axe? Just like the swords, they also come in a number of ornate and show-stopping designs, which makes them the perfect piece to have on your belt as decoration or hang on your wall to show off to your friends. Vikings used a ton of different weapons, but most commonly they were seen using:

And that’s just to name a few!

No sword is complete without its shield, though. The most common kind of viking shield you will see is the mighty round shield, a large piece of wood with a metal boss in the middle and a punch-grip style handle at the back. Their shields weren’t just defensive pieces, though - the vikings fought quite aggressively. The edge of a round shield is strong and can easily be used to pin an opponent’s weapon or bind their shield, making it the perfect companion to a sword or axe. The grip at the back of the shield gave it a fair amount of freedom, making it a very versatile, manoeuvrable offhand weapon, great for both shield walls and skirmishing.

Find a viking helmet (without the horns)!

One of our most popular items with the SCA community are our helmets. Over the years we have designed a number of different variations on historical prototypes, creating a line of items that are both functional and creative. We have made the most of the technology at our disposal to create helmets that are protective and beautiful, some with ornate etching and knotwork designs that really stand out on the field. Sorry, no dramatic horned helmets here!

We hope that you enjoy our beautiful collection of items. The Viking Collection is truly one of our masterpieces and we believe that everyone will see something they love or something that inspires them. Maybe you’re looking for a whole new outfit, or maybe you only need to find a simple viking bracelet for your beloved… regardless, you’re looking in the right place! 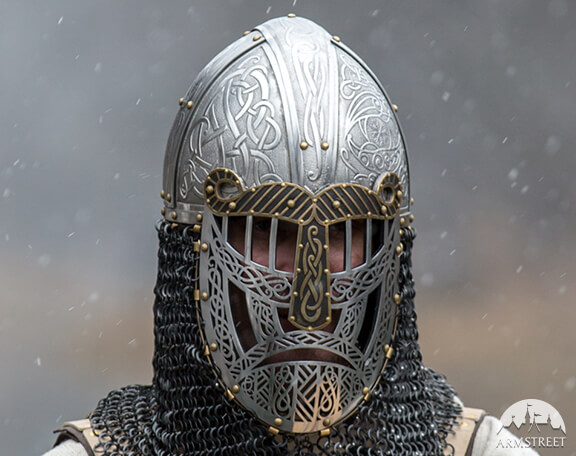