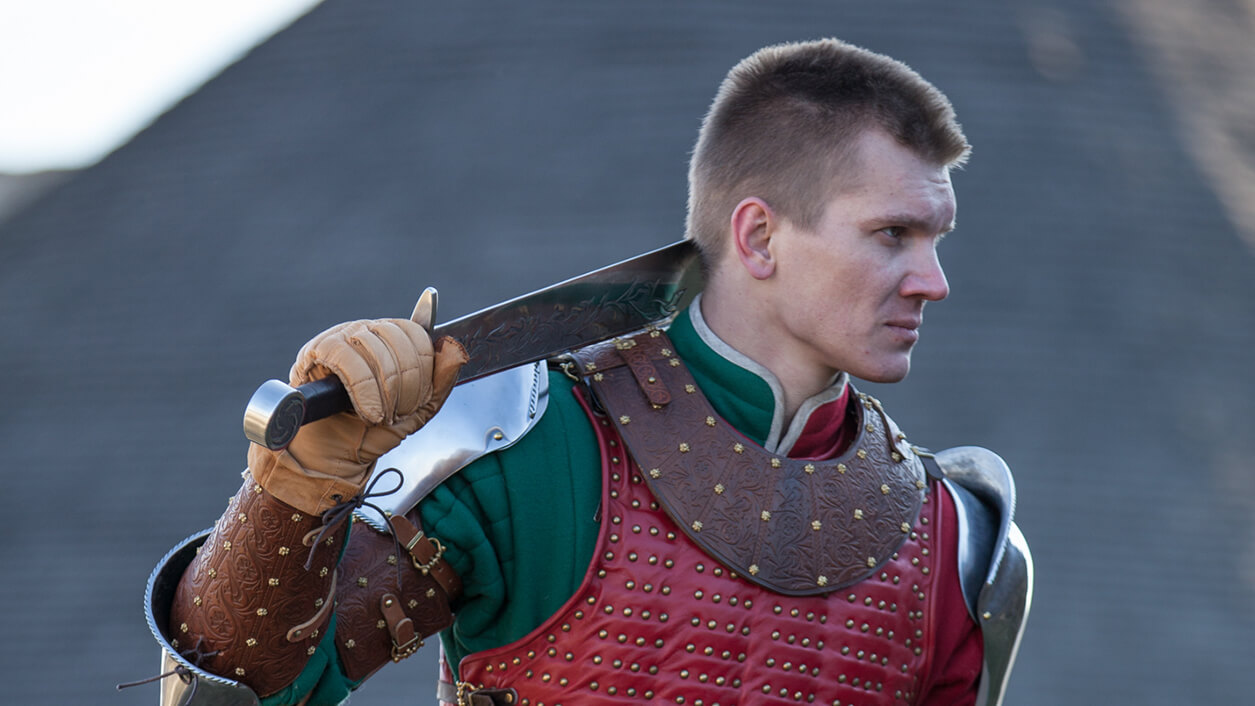 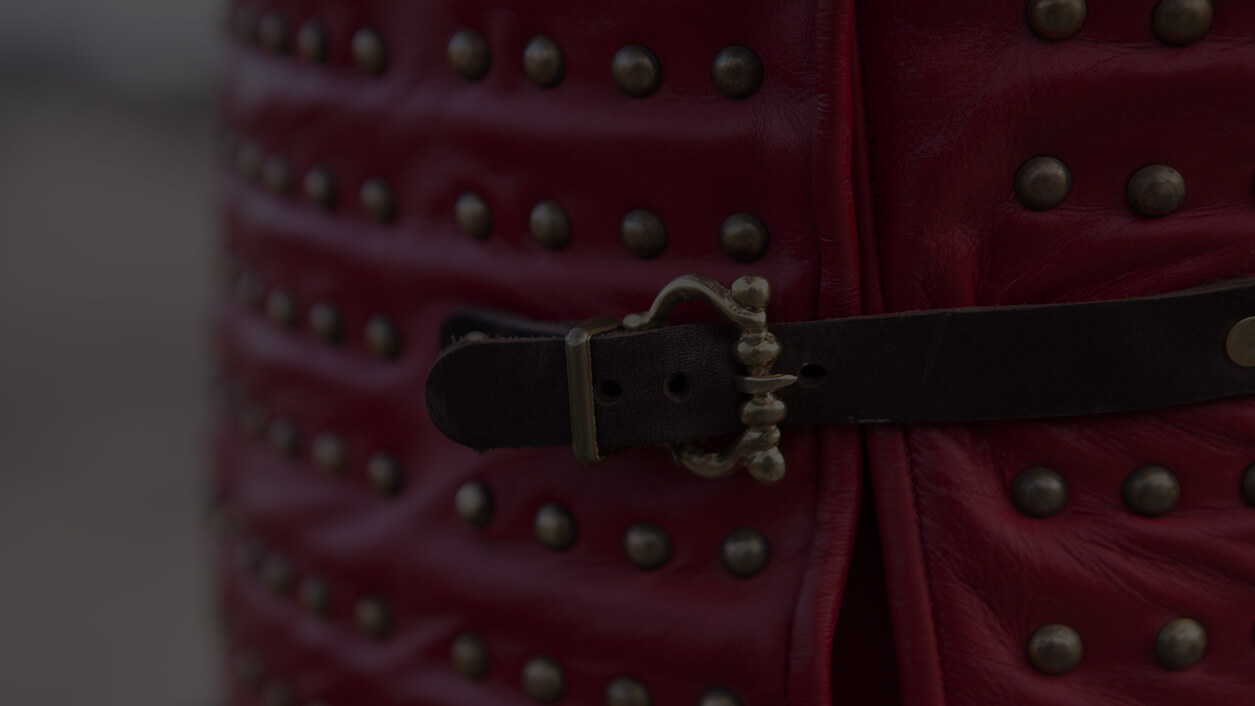 Birds of prey evoke a certain image: great eagles, quick falcons and foreboding vultures to name a few. It’s undeniable that these creatures are terrifying, strong, dangerous and utterly amazing to watch! This collection of armor is a series intended to have the same stunning aesthetic prowess as a bird of prey, as well as the same magnificent dexterity and flexibility as its namesake.

This set is based on the transitional armor of the Hundred Years War, which marks a time when soldiers started to trend away from using chainmail and entered into another era of popular body armor: the age of the brigandine. Popular from the late XIV century onwards, the brigandine offered protection at very little sacrifice of flexibility. Slim fitting, articulated and handsome in shape, brigandines also look fantastic on knights and mercenaries alike.
We started making this collection with the magnificent brigandine crafted from a huge amount of small plates with solid rivets and a strikingly colorful genuine leather font. From there we worked to make some of the most beautiful splinted armor you will find, made from veg tanned leather with embossed accents. We also added ornately roped stainless steel shoulder, knee and elbow pieces to complete the look and add a bit of shine. Along with a popular wool gambeson, they create a set that proves to be as functional as it is eye-catching.

The collection is completed by accessories such as a XIV century kidney pouch, a belt, a unique buckler and matching decorative weapons that prove to be a great combination for photoshoots and other adventures.

If there’s one thing that ArmStreet does well, it’s picking and choosing the most amazing pieces of history and bringing them to you in a modern setting. The 14th century was a very interesting time period, and there was a lot of change. Armor went from being quite simple to all of the sudden being beautiful and eyecatching, as tastes changed and people become more wealthy. With this collection, we have picked out some of the best pieces that may have been found in that time.

Enjoy the flexibility of the 14th century brigandine

Have you ever worn a brigandine? I’ll tell you now – they’re amazing. A lot of early 14th century breastplates were still solid steel and encumbering, which made it difficult to bend over and do other tasks. The brigandine brought in a whole new world of comfort and motion, and quickly became popular to those who could afford them! Because they consist of many tiny plates, they tend to absorb and distribute shock differently than a breastplate would, which in some cases means the wearer doesn’t take as much force from the blow. It also means you move, bend, and fight! 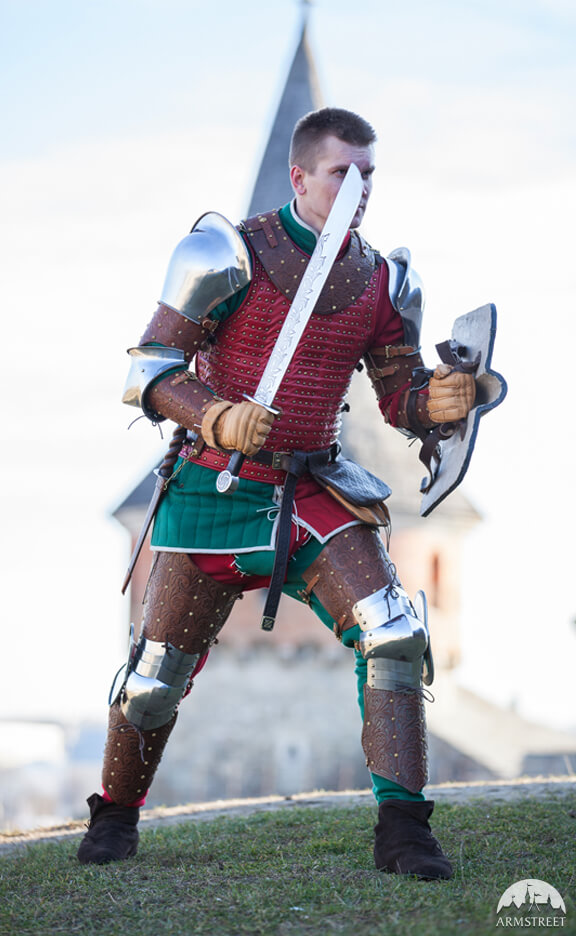 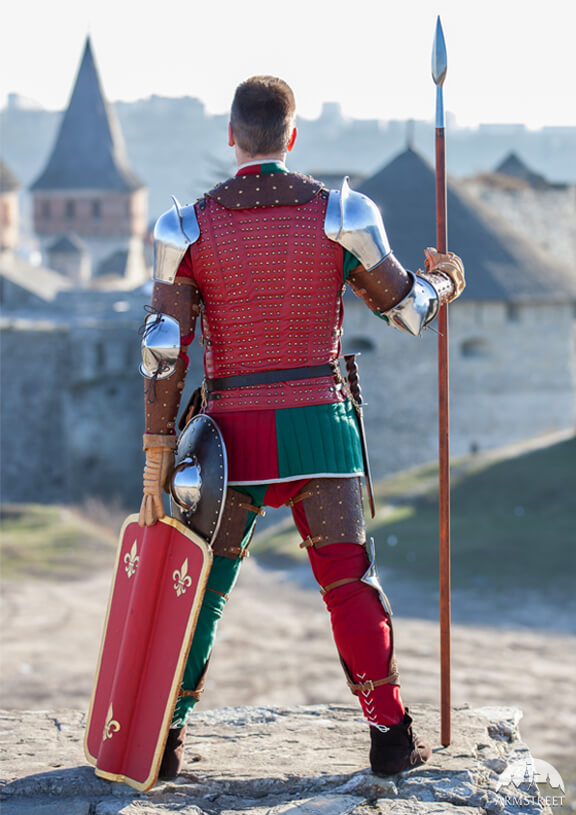 Dress yourself in the perfect 14th century English armor

It can be pretty intimidating trying to put together an armor kit – that’s why instead of just individual pieces, we offer whole collections of a complete look. If you are trying to piece together a kit, though, don’t forget these important pieces!

We feel that these are some of the most important parts!


Protect yourself in style with a 14th century gambeson

It is very important not to forget the padded garments that will keep you safe. They help distribute force, as well as protect you from rubbing and generally keep you more comfortable in your harness. There are many different styles of medieval padded jack, and many different materials as well. Wool has a little bit more cushioning and insulation and is amazing in colder climates. If you live somewhere warmer, though, you’re going to want to look at our linen options, as having something with breathability is a must. Generally, a 14th century gambeson isn’t too long and should come down to your hips but not much longer.

At ArmStreet, we are incredibly proud of our ability to pick and choose the best parts of history and combine them with our own creativity and design sense to produce something beautiful. When examining arms and armor of the hundred years war, we were very inspired and couldn’t help ourselves! The Bird of Prey was the result. We loved the combination of textures and wanted to design a kit that has the perfect marriage of leather and steel. As well as this, we still wanted to keep it relatively light and flexible, so that the wearer feels like they’re flying across the battlefield.

How did they discover the brigandine?

There is a question that a lot of people will be asking: was brigandine armor used in the 14th century? The answer is absolutely, especially towards the end of the century. They started out as more primitive coat of plates style armor, and transitioned into more sophisticated brigandines as the XV century drew nearer. As they grew more sophisticated, the plates became smaller, so there were many more of them! Eventually, they started putting gorgeous fabrics on the front, such as lush velvets and suede.

Look no further, we have you covered. If Bird of Prey isn’t what you’re looking for, we have a variety of different sets that will either make you a valiant knight or sly mercenary. Don’t just get armor, though – everyone needs some civilian clothes, too. Pick yourself up some undertunics and other clothing to wear when you’re off the battlefield. 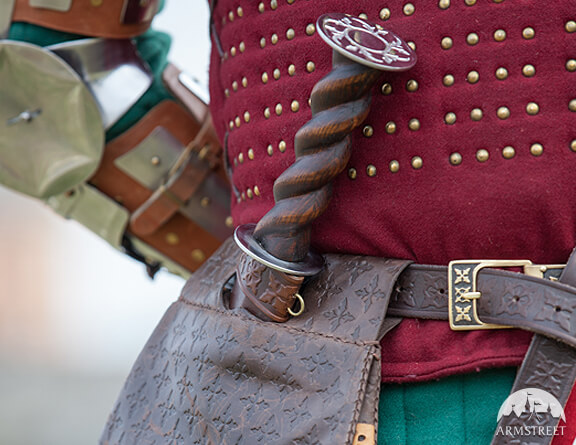 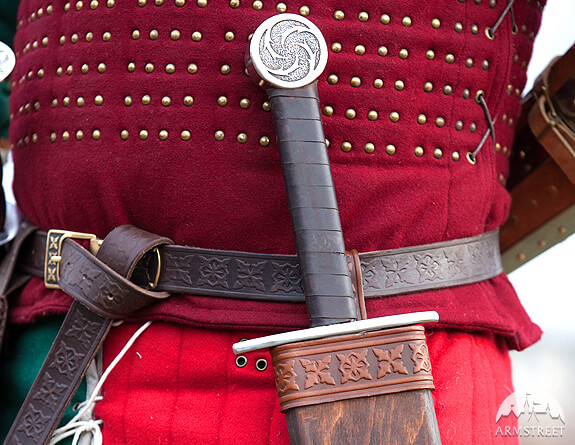