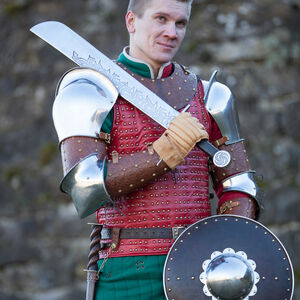 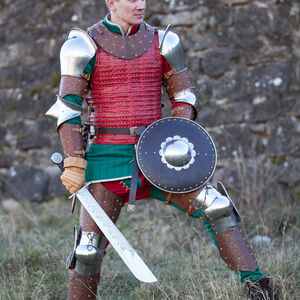 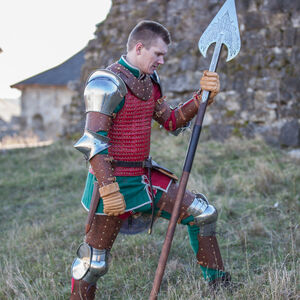 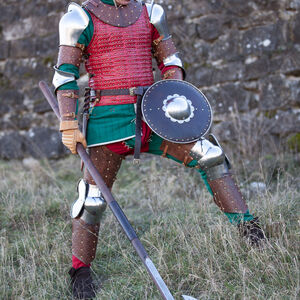 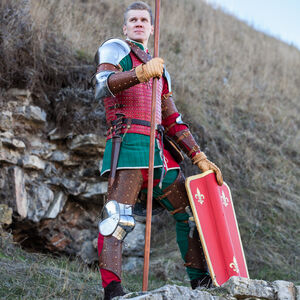 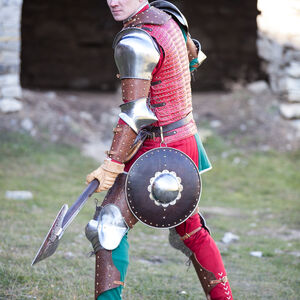 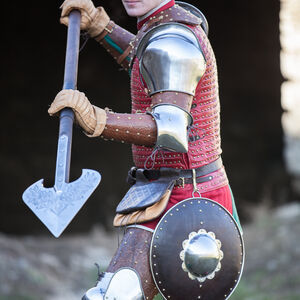 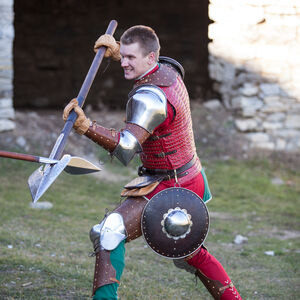 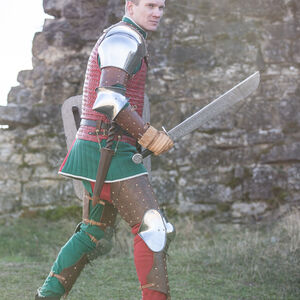 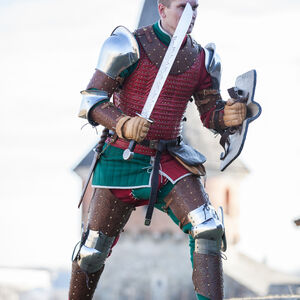 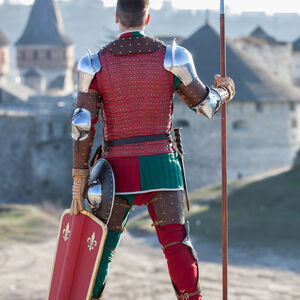 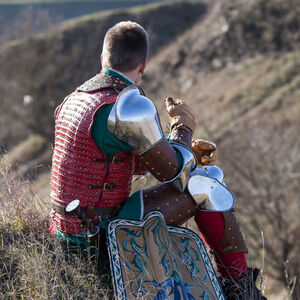 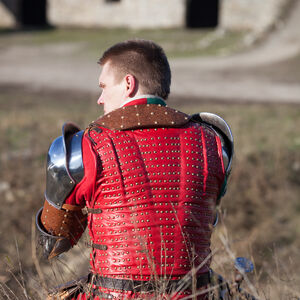 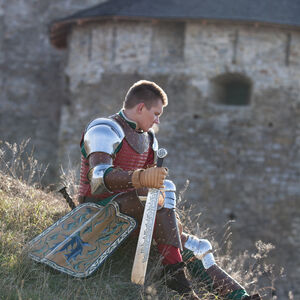 Stepping out like a medieval soldier begins in the armor, and this kit delivers in quality and uniqueness. The suit is based on the transitional armour of Hundred Years War. During that period armor styles were transitioning from primary chainmail to splinted and full plate, so the term generally used to describe armors of the late 14th century. Because of the utility of transitional armour generally and the design flexibility of brigandine body in particularly, it has inspired many modern reenactors and armorers to adopt similar elements for competitive harness.

Introduced in the late 14th century, the brigandine is synonymous with “flexibility”, while also being a quite a defensive improvement over the chain mail and scaled bodies of years prior. Crafted of the finest leather and polished steel plates, it employs a variety of scale shapes to ensure that you're protected and comfortable from the first try-on. Side strap design is known for its authentic styling and adjustable size fit. The gold colour rivets seen all around the surface allow dozens of metal plates to be attached from the inside, better protecting the torso but allowing for easy movement.

The design of articulated pauldrons was most heavily influenced by the joust originals of the period. Many similar types were seen throughout western Europe from the late 14th century to the mid 15th century. Reinforced with thick vertical plates called 'gardbraces' and rolled edging, they endow protection against polearm attacks coming from below.

The splint-and-stud limbs protectors do well from larp to bugurts, from SCA to BOTN. They're safety compliant with the hidden steel splints that absorb the blows. Lightweight veg tanned leather cushions the extremities as you move, reducing fatigue so that you can fight all day long. Together, these two were a formidable combination capable of defending a warrior from any attack. The leather outer shell of the arms and legs complements an ornitomorph embossed motif that adds a sleek medieval vibe.

Leather and metal gorget supports a one-of-a-kind style. Most commonly such armor collars were worn over the brigandine and served to protect the neck and give a place for the shoulders to attach. It can be also worn alone over a gambeson as a symbol of status. Arming points, buckled straps, dowel and lock pins make for easier putting on and assembling. Stand-up collar can be added for $50 extra.

Transitional harness was considered the commonplace of armor at its time, consisting of layers of metal and leather, working together to create a difficult-to-penetrate cushion of defense that likely kept many warriors safe from harm. Probably the most historically accurate full suit of armour we've made for today.

Please note, the other items shown in pictures aren’t included but can be ordered separately in our store.

Safety disclaimer: Sword-fighting and fencing is a dangerous sport. Fencing, historical fencing, medieval reenactment and martial arts as well as other related types of activity, are inherently connected to a certain risk level of injuries or death. The Company declines all responsibility for any traumas or harm done to oneself or to the third person, along with any material or consequential damage, impaired during the products usage. We admonish that all acts with armour, weapons or their components have to be performed before designated person who is responsible for safety of the particular event and accredited to supervise armour and sport weapon conformance to the event’s standards.

This item is part of the “Bird of Prey” collection 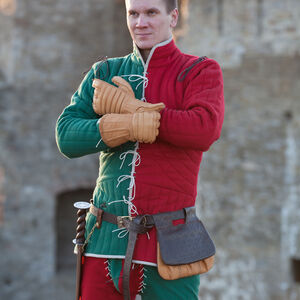 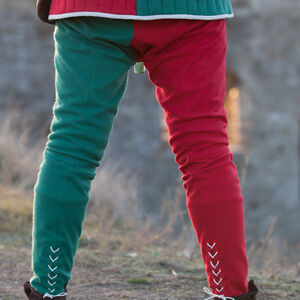 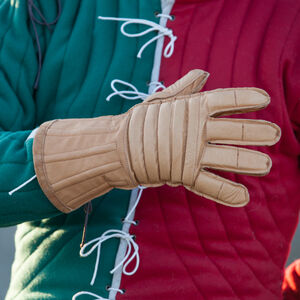 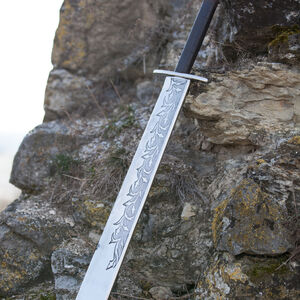