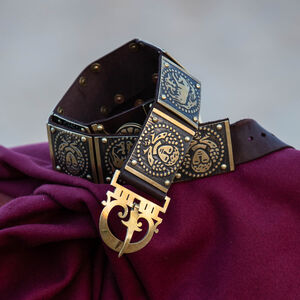 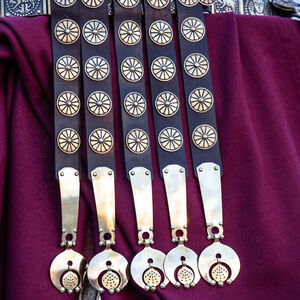 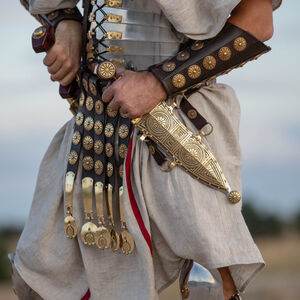 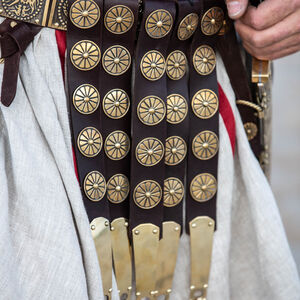 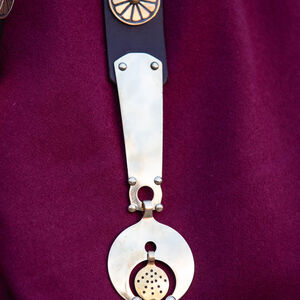 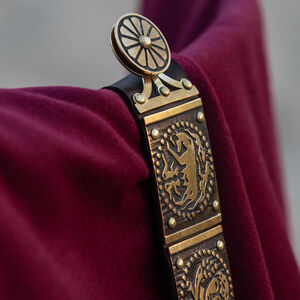 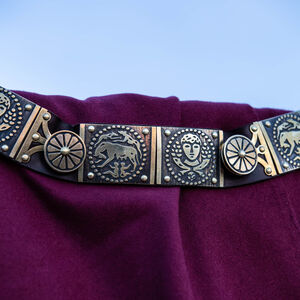 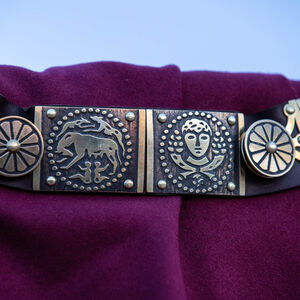 Is there a belt more instantly identifiable than the Cingulum? Even if you know very little about the Ancient Romans, you probably recognize this belt! Working with this time period is fantastic as a designer because there are so many written records and references for us to go from when creating new items. The Romans were astute record keepers who were serious about documenting their culture and preserving artifacts, which is probably why they are such a popular topic for reenactment! Roman military uniforms also have a very distinct aesthetic to them, which makes the whole look easy to work with fun to design for.

The Cingulum was worn as a badge of rank by soldiers and officials, and there is incredibly detailed information about the makeup of these belts. For example, each strip is called a baltea, the round fittings are referred to as bulla, the buckle is a fibula and the bits on the end are called the Pensilium and Lamna. The one piece of information we’re missing, however… is what the bulla are for, or what they’re meant to represent!

This Cingulum is based on historical sources but has been embellished by our imaginations. We have used modern technologies and high-quality materials to create something that is beautiful, durable, and probably much nicer to wear than actual Ancient Roman clothing. We have used strong leather and quality brass, and feel that the quality is obvious just looking at the piece.

The main component is the main belt, which has been adorned by 1.5mm thick brass plates which are about 4.5x6cm (1 13/16 x 2 13/32 in), featuring alternating motifs. While these motifs would have originally been engraved, we have chosen to expertly acid etch them. The two motifs we have used are Capitoline Wolf and Jupiter. The wolf is from the foundation myth of Rome, and was very important to their people. It entailed a huge she-wolf who adopted and nursed the twins Romulus and Remus. Romulus later killed Remus, and went on to found Rome. The other etching is of Jupiter, the Roman king of the gods, who was of huge significance in Ancient times. A 2mm thick laser-cut traditionally Roman belt buckle (fibula) is used to close the belt. Because this belt is not adjustable, it is very important that you send us exact measurements.

The balteum attach to the larger belt and hang down in front to make an “apron”. It has been speculated that they exist to protect the groin, but this has never been proven nor was it documented. This belt has 5 separate baltea, adorned with 5 etched bullae which have a diameter of 3cm (1 3/16 in). The Pensila at the bottom are also made from brass, laser cut with hand-engraved dots. Including the Pensilia, each baltea is about 41cm (16 9/64 in) long at the photos, but the length can be chosen by you at the "Measurements" section.

It is very important that you send us accurate measurements, as this is not an adjustable belt. Please measure twice to ensure you are getting the correct number.

This item is part of the “Rome” collection 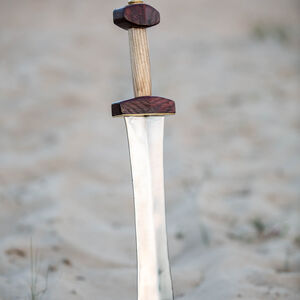 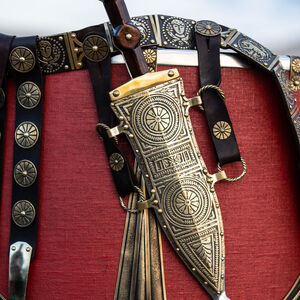 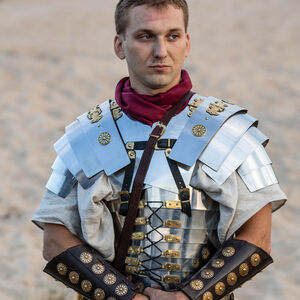 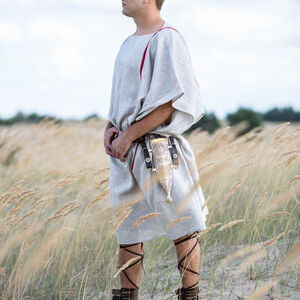