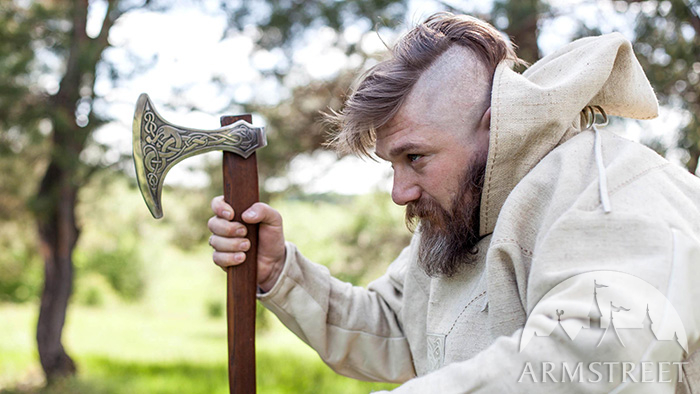 Vikings! Hearing this word, many people imagine some kind of uneducated barbarians who only know about eating, drinking, fighting and looting everything they can. But real Vikings actually had a rich culture and made some amazing works of art. Their ornaments, which today we shall take a look at, deeply influenced the early medieval art in northeastern Europe, as well as the art of Slavic tribes. 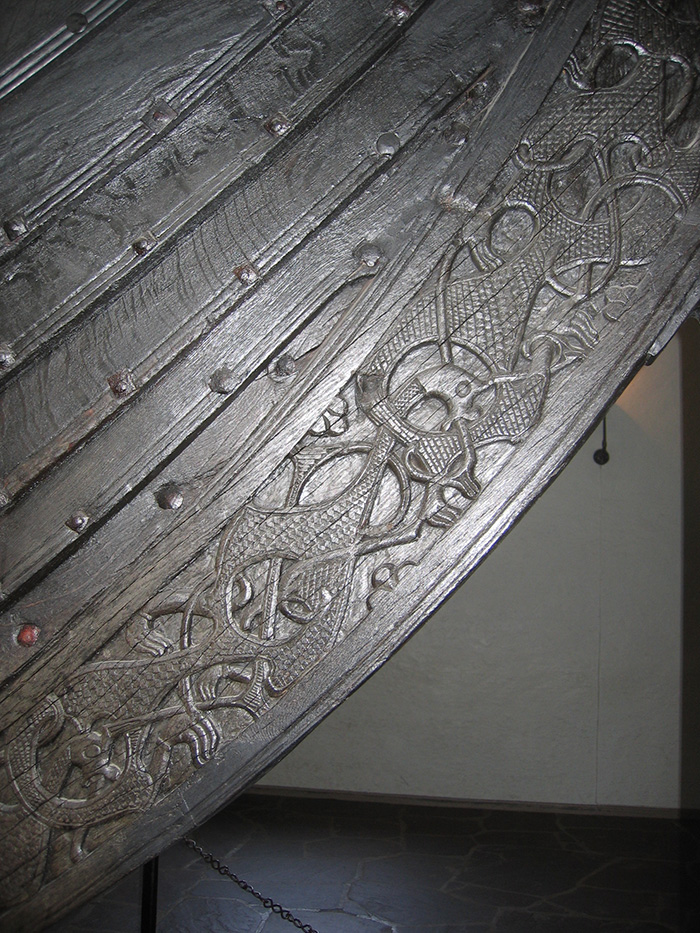 The earliest of Viking styles, dating to IX or early X century, this style is named after the ship decorated with marvellous wood carvings, found at the Oseberg farm in Norway.

Several Viking ship have been found since, and some of these findings have interesting stories about them, e.g. the Gokstad ship was found by two young sons of a local farmer, who were bored one day in 1879 and decided to go dig an old mound, hoping to find something interesting.

The Oseberg ornaments consist of fantastic gripping beasts with heads in profile. Their necks, limbs and bodies are shown in a schematic manner, making tightly interlaced oval-like or drop-like shapes, sometimes with holes, with broad lines denoting necks and limbs. There is sometimes a filling texture of thin parallel or intersecting lines inside the “bodies”. 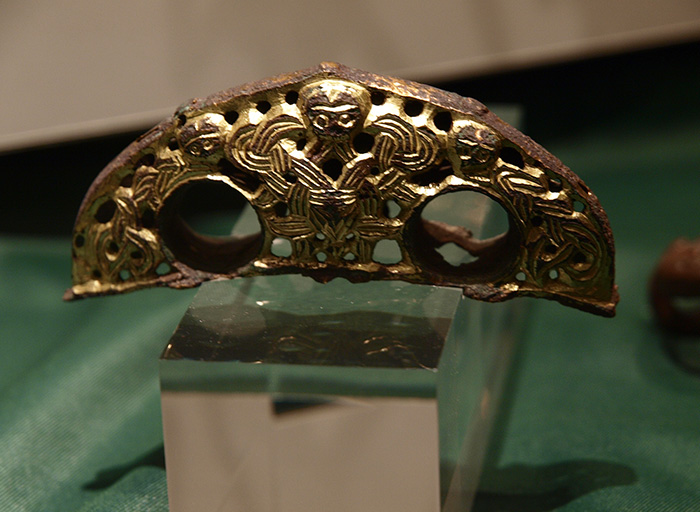 The Borre style is dated to the period from the late IX through X centuries. Borre is the name of a village near the mound cemetery discovered in 1852. This style is quite different from the other five.

Its main motif is a symmetrical interlaced pattern made up of a double ribbon. The pattern is commonly terminated by a stylized animal mask. These masks are the second distinctive feature of the Borre style. They are always shaped as a triangle with a peculiar snout, two round eyes, and sometimes half-round ears. 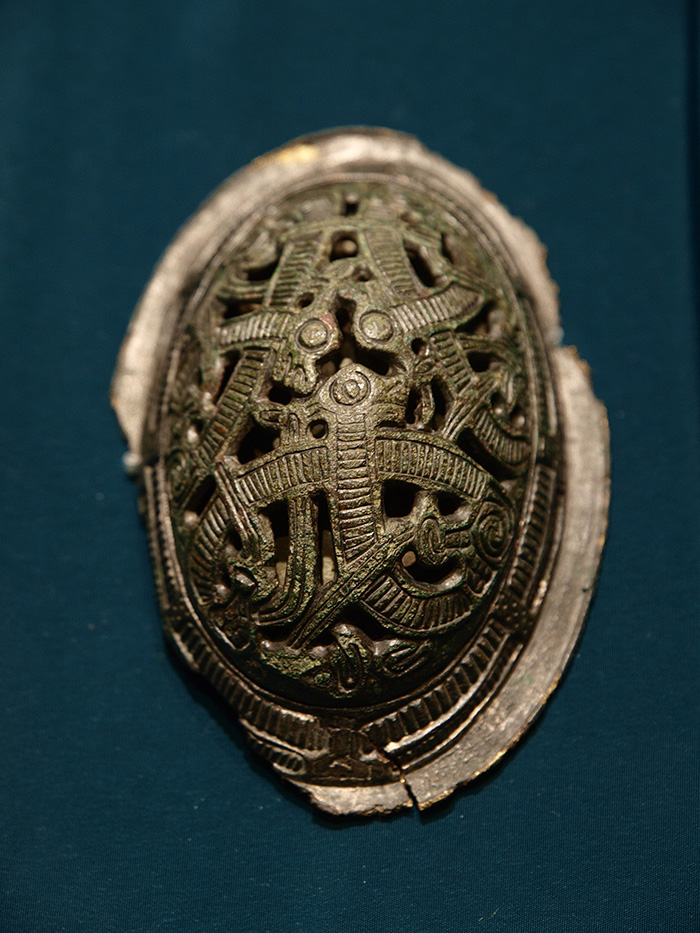 The Jellinge style is from the X century and, unlike the first two. includes findings that are very diverse in geography, quality and motifs, which makes it difficult to define it precisely. Its main characteristic feature is angular interlaced ribbon-like animals with heads in profile, disproportionately short limbs, and spiral hips. Their ribbon­-shaped bodies are double­-contoured and filled with transverse billets. 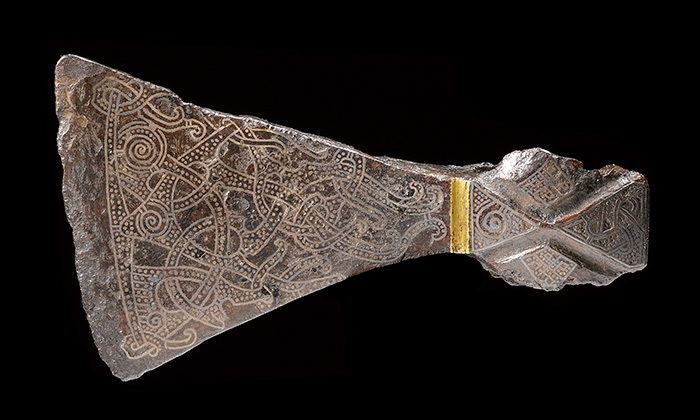 The Mammen style (XI century) is closely related to the Jellinge style, but with more substantial animal bodies filled with pelleting instead of billets. Apart from that, additional thin lines appear in the Mammen patterns, emphasizing the thick major lines of the ornament and ending with small drops. This technique would be later developed into a characteristic feature of the two styles to follow, Ringerike and Urnes. 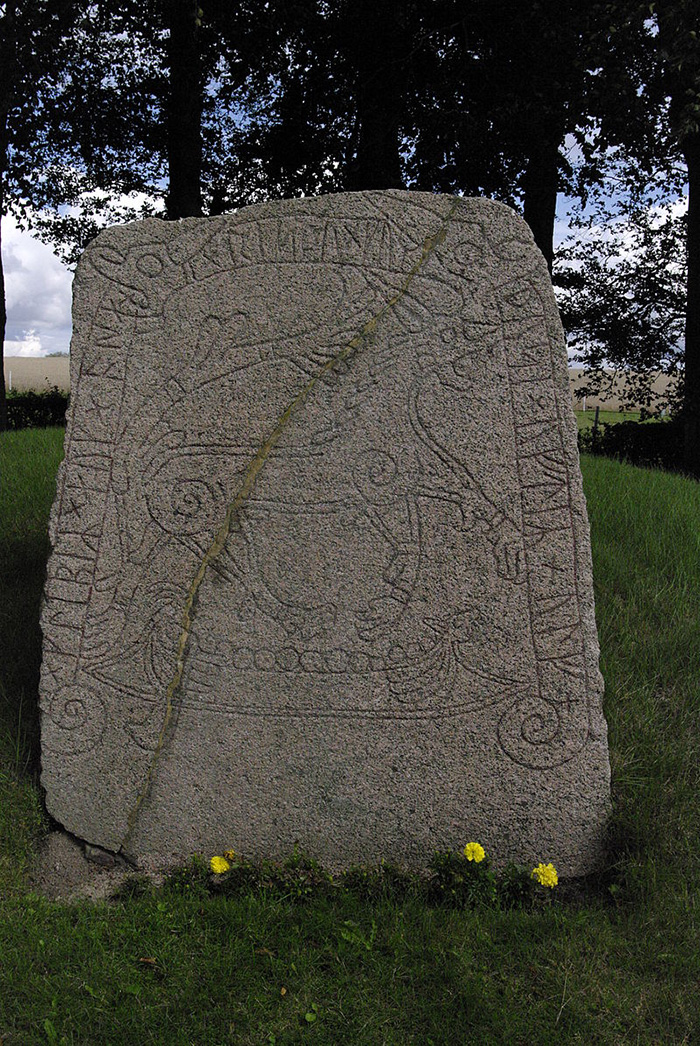 The four styles described above are mainly seen in metalwork and carved wood. The Ringerike style of the early XI century, on the other hand, we mostly know from stone carvings.

Scholars believe that the Vikings borrowed ornamental stone-carving techniques from the peoples of the British Isles, because no stones have been found from before the X century with carvings more complex than a simple runic inscription or a magic symbol. In particular, the distinctive curls and endings which had appeared in the Mammen style and developed in Ringerike are definitely Anglosaxon or Ottonian in origin.

The main motif of the Ringerike style is a fantastic animal, quite massive and dynamic, with four paws, something like a mane and multiple tails, which scholars usually call the lion, or “the great beast”. The mane and tails are made of intertwined thin lines and end in tendrils.

Beside the lion, patterns of this style often contain snakes, sometimes with teeth and ears, or rudimentary paws, and sometimes with runic inscriptions inside the body contour. 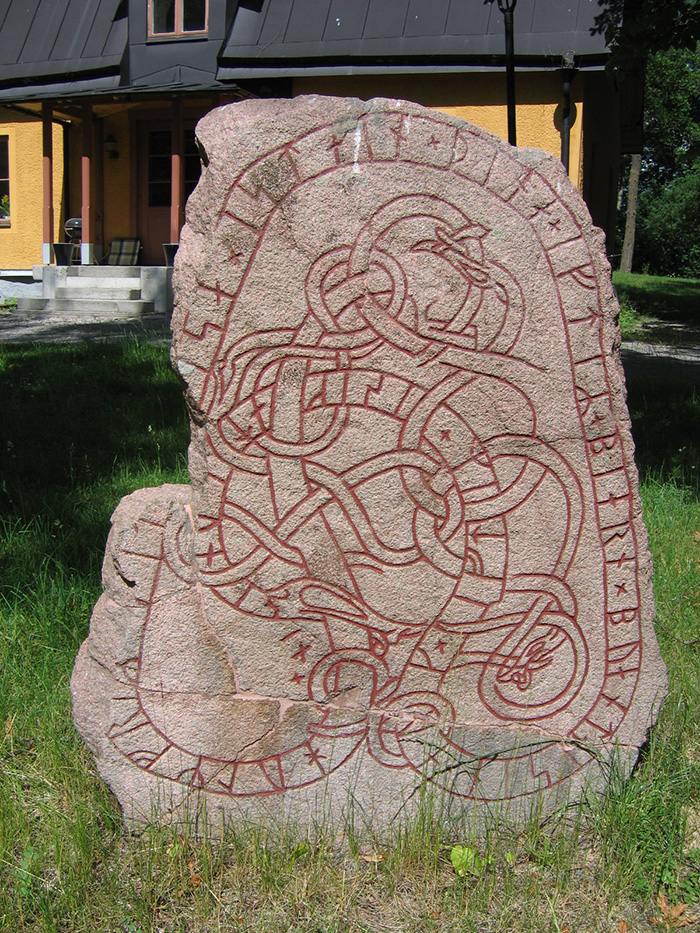 The Urnes, a.k.a. runic style, from late XI to early XII centuries, is the latest and probably the best known of the Viking styles. Unlike the rich in detail Ringerike style, the Urnes ornaments are quite laconic. Most often they comprise  snakes or dragons, with elegant heads of complex shapes, sometimes with one ot two paws, as well as four-legged, long-necked animals with tails. These animals keep the characteristic Viking-style features: the spiral hip of Jellinge origin and the pointed eye of the Ringerike style. Their bodies make up an interlaced pattern with round loops, combining thick and thin lines for beautiful contrast. The snake bodies can be filled with runic inscriptions.

The most famous example of this style is a carving from a stave church in Urnes with a four-legged animal caught in the loops of four snakes. Some scholars interpret this as a picture of Ragnarök, others see an allegoric picture of battle between Christianity (the lion) and paganism (snakes).

So, in a nutshell

This, as we have seen, is the way that the Viking ornaments were developed and their style changed. In this brief review, of course, we couldn't possibly cover every detail and nuance of more than two hundred years' worth of the Viking art, which originated in the pagan Scandinavia and spread to the Christian Britain, only to be replaced by the pan-European Romanesque style; we hope, however, that this short introduction is useful and illuminating.

For our Vikings and Shield-maiden collections we mostly chose the Urnes style as a source of inspiration. More on our work on the patterns in these collections in our next posts. 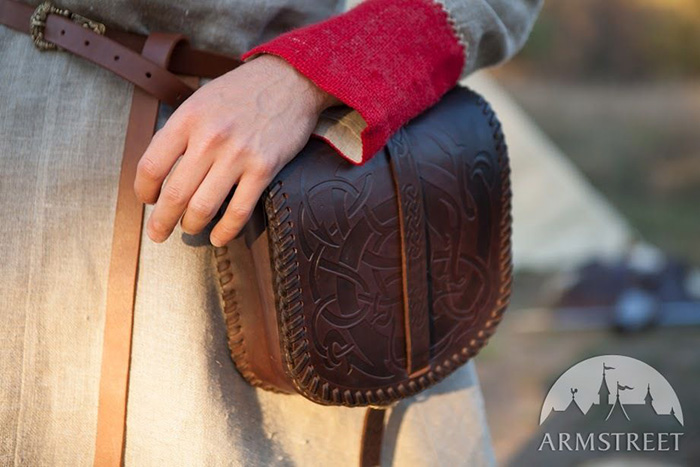 The Large Viking Leather Bag from the Viking collection