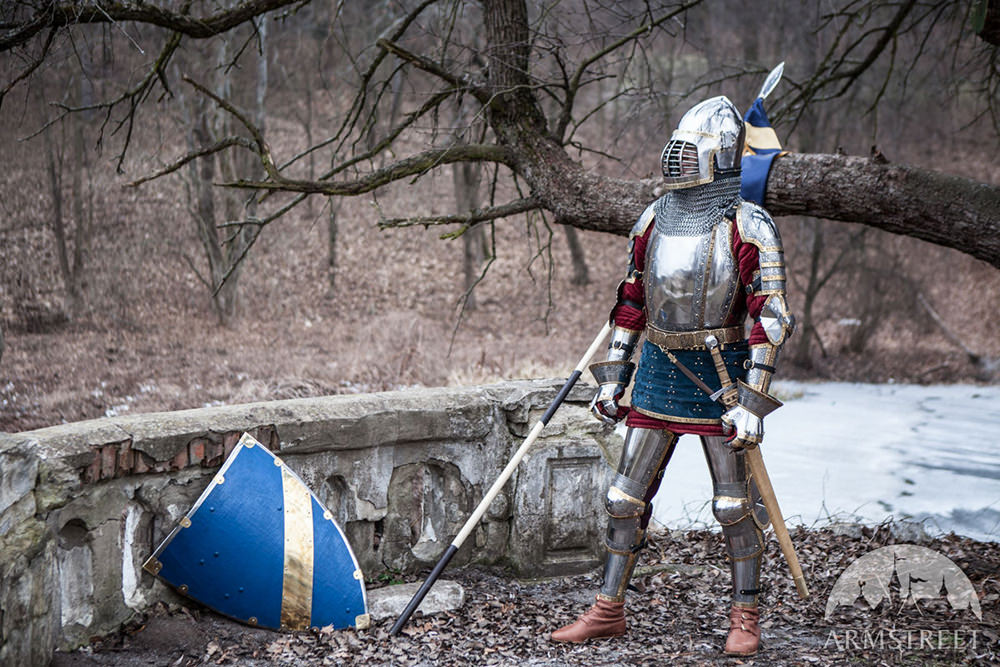 To celebrate new 2014 year we are, with certain pride, presenting our new suit of armour — “The King's guard” — one of our top quality functional medieval armor kits. Overall armour design and style are based on late XIV century Northern Italy armors.

Experience of the Hundred Year War, introduction on the battlefields of the Continent large and well organized regiment of English archers, as well as definite advancement in the mechanic and power of Italian crossbows demonstrated inadequacy of protection provided by types of armour based on chain-mail and coat of plates and led to the end of XIV century to the explosion in the design of full-plate harnesses. Northern Italy with due to its' definite lead in the technology and mass production quickly became a trend setter in the field of the new type of armours.

The early XIV century coat of plates was replaced first with the single peace breastplate and, later in XIV century, — by segmented ¾ or full cuiras which extended protection to the sides and the back. Great helmet was generally replaced with bascinets with removable visors of various designs which provided better visibility and versatility. Limbs protection finally evolved in the design we are generally associating with European armour — and it is the end of the XIV century when we have first examples of “hour-glass” gauntlets surviving to our days.
For this particular suit of armour we found our inspiration in the famous armour of the Fogt of March exposed now in the Churburgh Castle Museum in Northern Italy.

Development of the etching techniques in the end of XIV century allowed more pronounced decoration of the armours, however, religious inscriptions were still more prevalent element of the decoration then floral design — which found reflection in the overall design of this new suit of armour. (Yes, we took some liberty making floral elements of design a little bit more pronounced then it was common in late XIV century, but we thought the the result is so gorgeous that you'd probably will forgive us!) 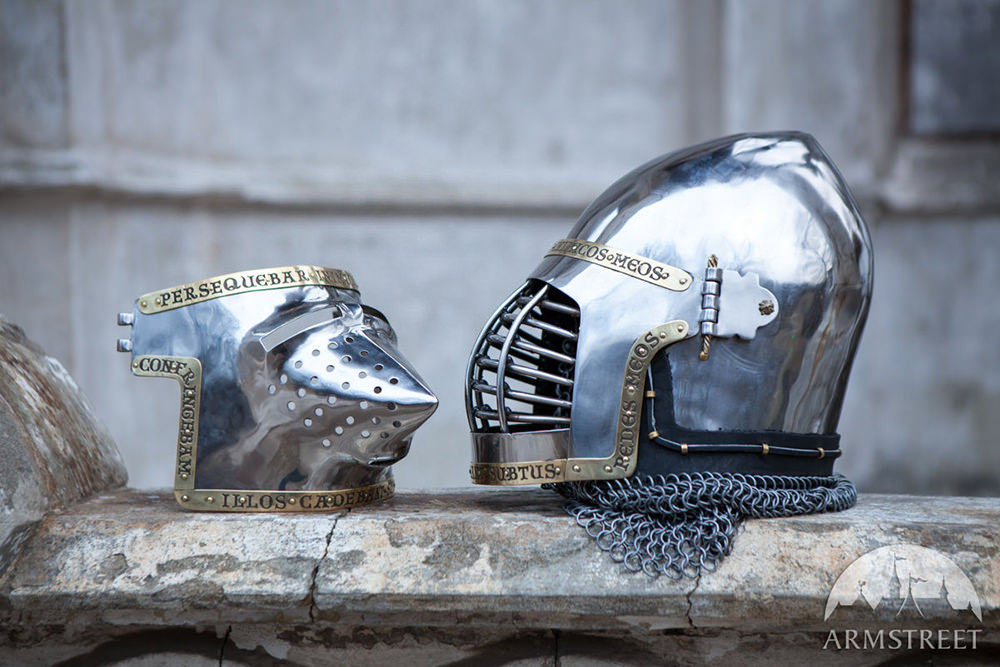 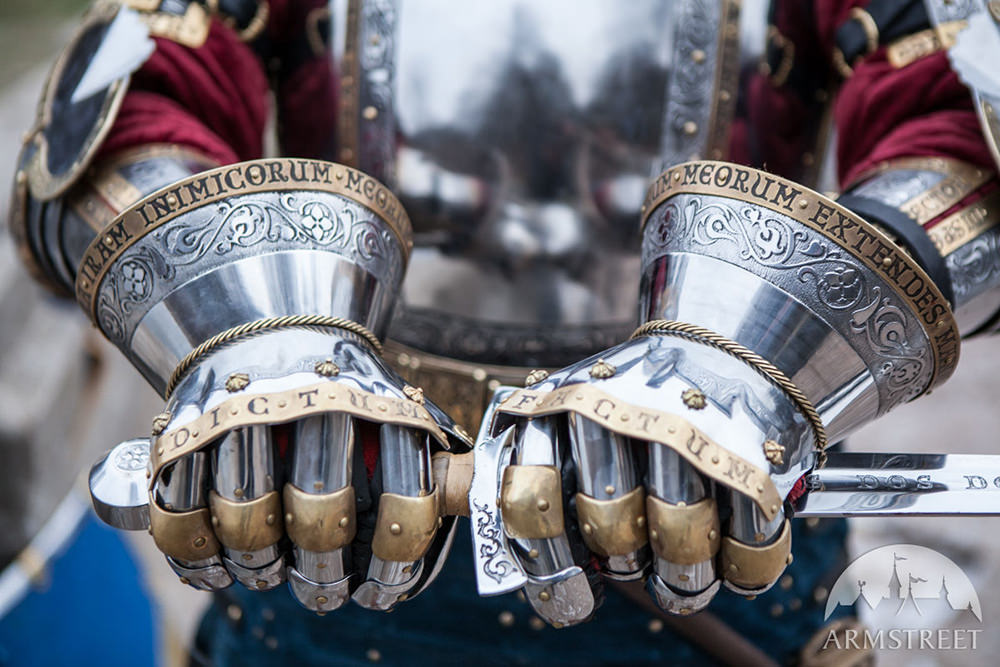 “The King's Guard” kit comes with “Hourglasses” finger gauntlets which provides good protection and excellent handling of the sword. Etching on knuckles says “Dictum — Factum” (Latin: “What is said is done”) and incription on bordering is “Contra iram inimicorum meorum extendes manum [tuam]” (Psalm 138:7, latin), which means “Thou shalt stretch forth [thine] hand against the wrath of mine enemies”. 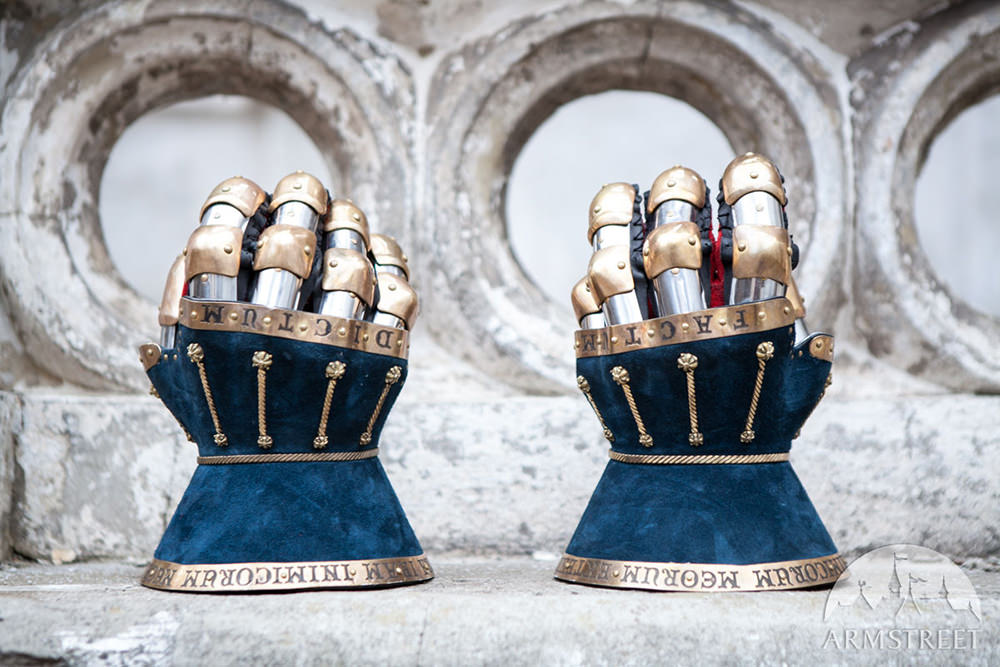 Cuirass which comes as part of this armour is pretty common nine-parts period cuirass. It is also beautifully decorated by etched patterns and brass bordering with inscription.
Inscription on cuirass says:

Front plate: Latin (psalm 91:5): Non timebis a timore nocturno, a sagitta volante in di­e, a pe­s­te perambulante in tene­bris English: not be afraid of the terror of the night, of the arrow that flieth in the day, of the business that walketh about in the dark

Latin (Psalm 91:7): Cadent a latere tuo milleet decem milia a dextris tuis; ad te autem non appropin­quabit.Eng: A thousand shall fall at thy side, and ten thousand at thy right hand: but it shall not come nigh thee.

Side plates: Latin (Psalm 91:13): Super aspidem et basili­scum ambulabis |  con­culcabis le­onem et draconem. Eng: Thou shalt walk upon the asp and the basilisk: and thou shalt trample under foot the lion and the dragon.

The cuirass protection extending down with the detachable faulds of five lamels warped in the coloured split leather. Design imitating “Brigandine” type of armour was extremely popular at the time.

Cuirass faulds (war skirt).This is functional and great looking part of our kit. This skirt provides great balance between weight, mobility and great protection from all sides. If you choose leather-covered version of finger-gauntlets you'll have matching leather-covered piece of armour.

Inscription on the faulds:
Latin (Psalm 59:1) Eripe me de inimicis meis, [Deus meus], et ab insurgenti­bus in me protege me.English: Deliver me from mine enemies, [O my God:] defend me from them that rise up against me.

Arms and legs are based on the samples of classic late XIV century — early XV century design with upscale decorations and details. 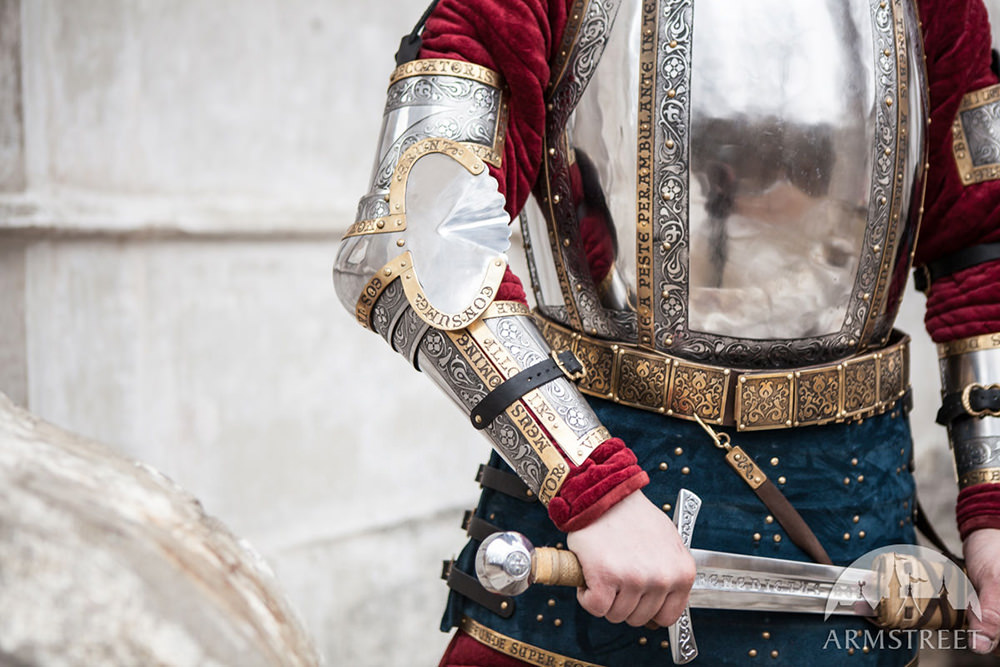 Puldrons: Lat. (Psalm. 10:15) Contere ­brachi­um peccatoris et maligni
Engl. Break thou the arm of the wicked and the evil man
Elbows:
Latin (Psalm. 59:14) Consume eos in furore, con­sume, et non erunt
English: Consume them in wrath, consume them, that they may not be
Biceps plates:
Latin (Psalm 59:12 Disperge illos in virtute tuae­t pro­s­terne eos, protector meus, Domine
English: Scatter them by thy power; and bring them down, O Lord our shield

Latin (Ps. 56:12) “In Deo speravi, non timebo: quod faciet mihi homo”
English “In God have I put my trust: I will not be afraid what man can do unto me”
Latin (Ps. 91:2) Refugi­um meumet fortitudo mea, Deus meus, sperabo in eum
English: “He is my refuge and my fortress: my God; in him will I trust”

Cuissess:  Latin (Psalm 91:11) Quo­ni­am angelis suis mandabit de te, ut cu­s­todiant te in omni­bus viis tuis.
Engl (ps. 91:11) For he shall give his angels charge over thee, to keep thee in all thy ways

Latin (Psalm 91:12) In mani­bus portabunt te, ne forte oﬀendas ad lapidem pedem tuum.
Engl. 91:12 They shall bear thee up in their hands, lest thou dash thy foot against a stone.

Latin (Psalm 91:4) Scu­tum et lorica veritas eius
Engish: His truth shall be thy shield and buckler.

Latin (Psalm18:33) Deus, qui prae­cinxit me virtuteet posuit im­maculatam viam meam
English (Psalm 18:33) It is God that girdeth me with strength, and maketh my way perfect

Check all pieces from “The King's Guard” collection