Enamel in the Middle Ages

The Middle Ages are a time period marked by beautiful art, stunning sculpture and fashion that still captures imaginations in our modern day. There is one medium, however, which is not often discussed yet stands out as one of the brightest, most stunning art forms which has had an effect on modern jewellery design and crafting processes: enamel. Enamel played a significant role in the European art history, especially in the Middle Ages. There are many theories about how it started, and many different sources it could have made its way to Medieval Europe from, one of which being Migration period people adopting Byzantine enameling techniques.

So, what is enamel? We use this word to mark a very beautiful combination of a colored glass fused on metal, stone, ceramics and other materials that can withstand the high temperature needed for this process. Enameled surfaces and decorative elements have a high chemical and mechanical resistance, which makes them resistant to high humidity and to chemically aggressive environments.

The quality of glass in Europe has improved a lot during the Merovingian and the Carolingian periods, and the production of several of the most popular colored enamels was mastered. At that time, the Roman style champlevé (french for "raised field", where the surface is carved out to form pits in which enamel is fired) enamelling was still very common.

In the IX and X centuries, new workshops appeared along the Rhine and in Lotharingia, which produced enameled gold in Byzantine style - the so called cloisonné enamel. “Cloisonné” is the French word for "cell", where thin wires were applied to form raised barriers, which contained different areas of (subsequently applied) enamel. These were mostly small accessories and jewelry decorated with ornaments of colored cloisonné enamel - sacred utensils, above all. Depicting people or creating other images with enamel was rather an exceptional thing. An example of that is the image in the base plate of Mathilde’s cross. 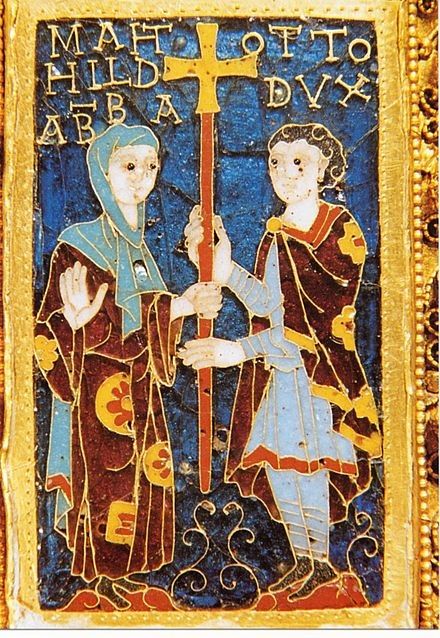 Ottonian enamel around 982: Mathilde with her brother Otto

Another example of the cloisonné enamel is an eagle-shaped buckle from the treasury of Gisela - wife of Emperor Conrad II. This buckle was made approximately at the end of the X century. The head, wings and tail of the eagle are enameled, and the wreath is decorated with gems. 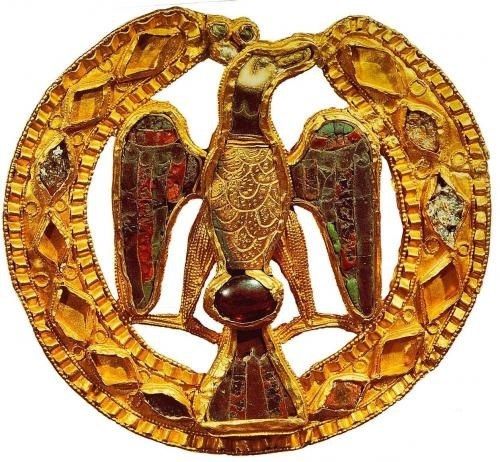 Eagle buckle from the treasury of Empress Gisela, circa 1025

In the XII century enameling gained further development in Limoges and in the Rhine-Meuse region. At the time this art was greatly influenced by the East, especially by the Byzantine Empire’s and Syrian techniques. Due to the high quality of technical and artistic performance (especially the sacred vessels - the main subject of the work of a medieval jeweler), the influence of Byzantine enamel on gold was decisive. The use of imported plates with enamel to decorate vessels and utensils and the acquisition of their own experience in the new technique by Europeans gave impetus to the development of enameling, which began to acquire significance as an independent art form.

From the XII century, champlevé began to be recognized as an artistic method of decorating church utensils with color and ornamental motifs. The surface of the objects enameled in this way is smoothly polished and appears as single, as in the cloisonné enamel. If the metal base is made of a “noble” metal, then preference is given to a transparent glass powder, the color of which may change under the influence of the base. With red and yellow tones of the material the gold foil is added to increase the intensity of the color and the effect of transparent enamel, and with blue and green - a high grade silver foil. If the base metal is one of the “regular” ones, such as copper or bronze, then opaque enamels are used more often.

The most significant enamel production centers were located along the Rhine and Moselle, and the city of Limoges. The growing demand for inexpensive and sightly church utensils led to more frequent use of this new decoration method. At the time, gilded copper was the most common base material. Apparently, the purely economical reasons caused a switch from cloisonné enamel on gold to Roman style champlevé on copper.

A celtic champlevé enamel techniques influenced by Byzantine tradition led to the emergence of a new unique style. Nikolaus von Verdun’s Klosterneuburger altar is a great example. Here the background is covered with blue, green and red enamel. Made entirely of copper, the altar was then gilded. Absolutely incredible work of art.

In the middle of XII century Limoges became the biggest and most important center of champlevé enameled church utensils production and stayed in this status until the XIV century. Here an appearance of mass produced artisanal enameled objects led to depreciation of the more subtle and high art items, and yet the works of art created in this period could be compared with the best of those made in Rhine-Meuse region. 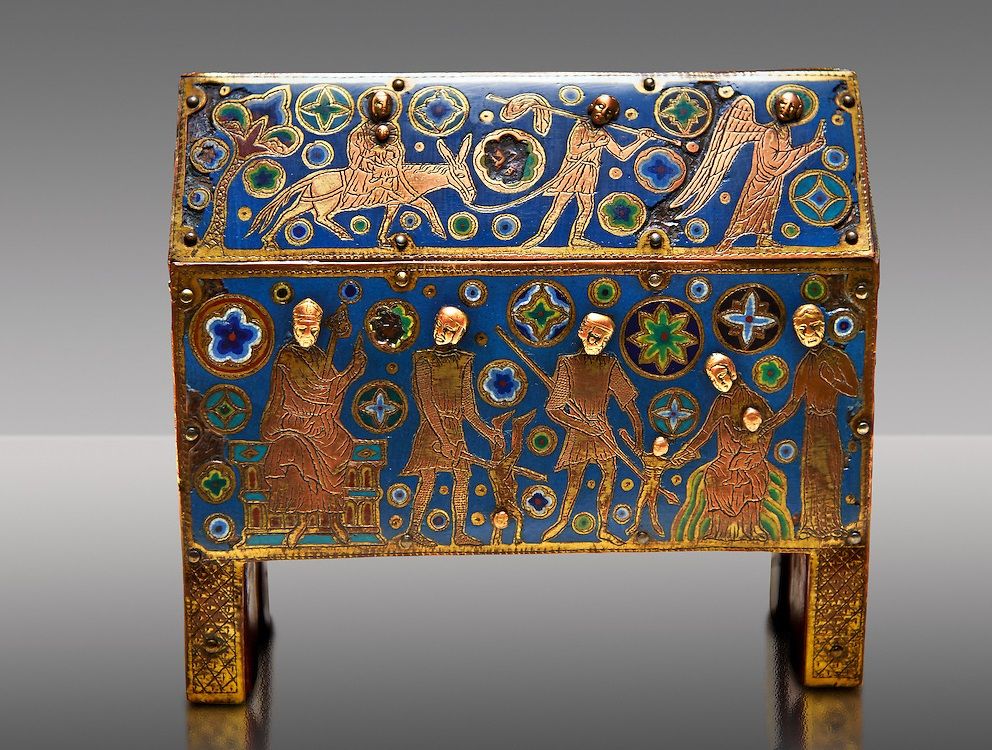 Gothic chest decorated with the Slaughter of the Innocents from Limoges Circa 1210-1220. Engraved copper with inlaid enamel champlevé and glass on wooden core. National Museum of Catalan Art, Barcelona, Spain

Despite the fact that new and more complex enameling techniques were born, the previous widespread methods were not replaced completely. On the contrary, they were used in many new original ways, adding to European artistic heritage a lot of true masterpieces. Thus, champlevé enamel remained one of the most common ways of simple decoration, usually applied to weapons, fonts and casual utensils.

Meuse region enamels are high class pieces of art. In the time, French and German jewelry art were affected by the Gothic architecture and Gothic style in general. We can clearly see the appearance of some typical Gothic features in the jewelry of this period, just like in sculpture and architecture.

Famous Limoges enamels crossed the borders more and more often and became more spread in Europe. Some examples were found in a number of neighbour countries. In the Burgos cathedral in Spain we can see one of the biggest and most beautiful Limoges artifacts: a copper tomb of bishop Mauricio, who died in 1238. The tomb is molded in the shape of a lying man and is decorated with gilding, embossing, champlevé enamel and inserts of cabochons (shaped and polished gemstones). 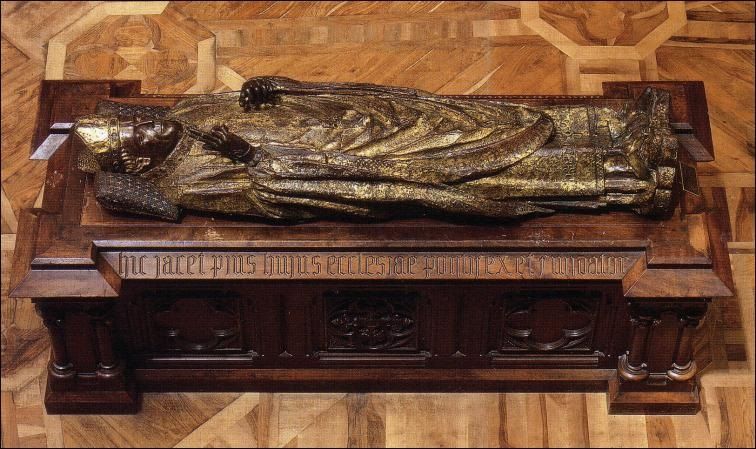 Limoges left us a rich heritage of various enameled products: wands, chests, crosses, half-body and head reliquaries, bookbindings, pendants and so on. We also need to mention some great cloisonné enamel examples, transparent on a golden background. A beautiful quatrilobed plaque is kept in Clevelend Museum of Art. With this technique an incredible transparency and gloss were achieved.

Quatrilobed Plaque, made around 1280–1300 in France, Paris. Gold, cloisonné, and translucent enamel

The beginning of XIV century brought a next level of enameling techniques development, that were even more demanding to craftsman's skill. Enamel was applied to a flat surface and was transparent. Thus, an image was seen through the layers of enamel, which made it more mysterious, and the thickness of enamel layers in different parts of the object it covered produced various artistic effects. This technique was used to make gothic style church utensils and jewelry. Despite the roughness (which was made with soft engraving) of the basis enamel was applied on, the adhesion was not strong enough in many cases, and the remaining items made in this way are often chipped.

Here in ArmStreet we just could not pass up this great decorative technique used so widely in the Medieval Period. One of the first products we made with enamel on it was the knight’s heraldic belt, which you could have already seen on the Gothic Knight photo shoot. Thick brass plates were engraved to create a pattern and then filled with bright enamel to create a historically inspired look. 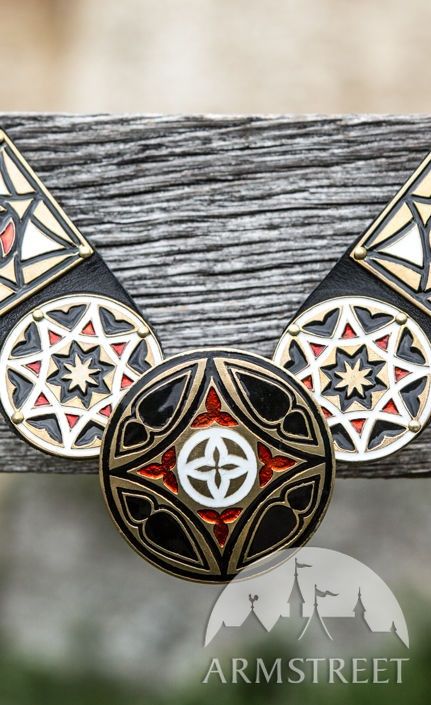 Another example is our recent “Renaissance Memories” collection lockets. There are several beautiful floral designs of the front, which are all made with enamel. An absolutely luxurious look is the result, which leaves no one indifferent. Check the video we have made and see for yourself! 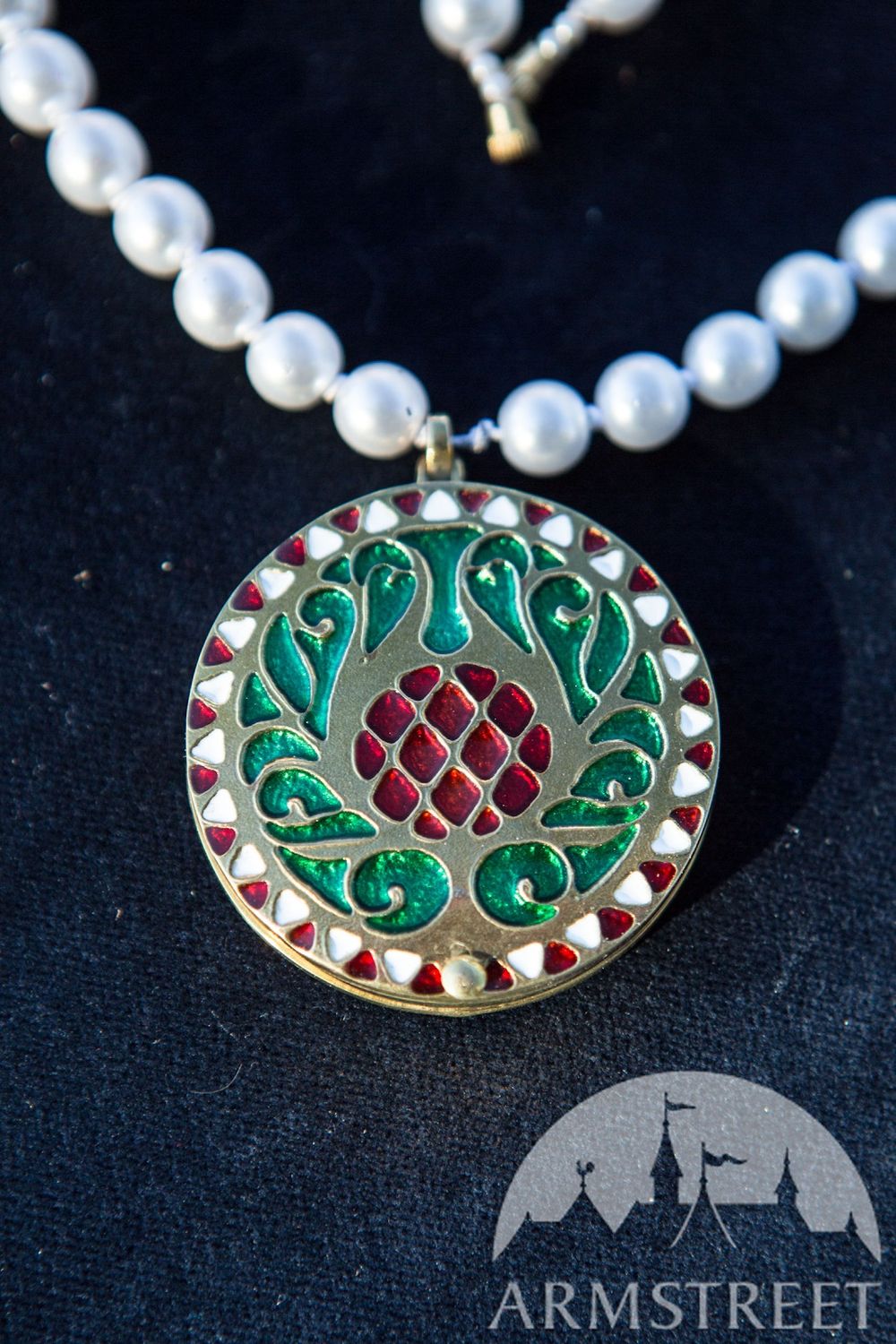 And, of course, this is just a beginning! There are so many ways enamel could be used and so many gorgeous items that could be created using this technique, and we are eager to use our fantasy and expertise to make them real. Are you excited? 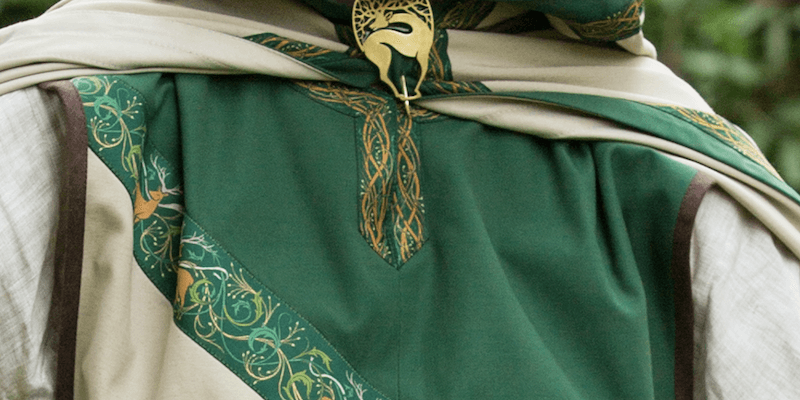 Get customized unique clothes, accessories and camping necessities made by professional craftsmen and see how outstanding your team, guild or band is!

Get customized unique clothes, accessories and camping necessities made by professional craftsmen and see how outstanding your team, guild or band is!