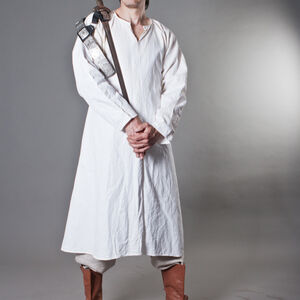 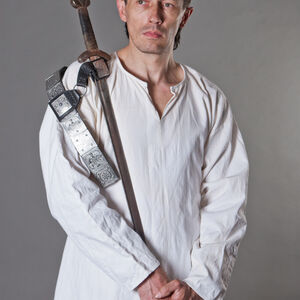 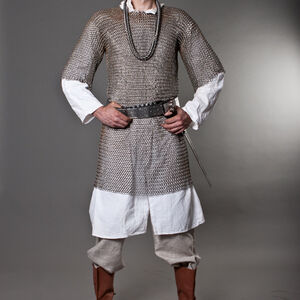 A cold stone surface slowly drew aside, revealing a narrow opening of a passage behind. It was dark and damp inside and a torch smoked softly in the hand, casting sharp shadows on the ancient walls. Yet the air was not stagnant and the draft made a young knight in the thin templar tunic shiver. When had he taken off his armour? He felt he had seen the place before, but the memory of it slipped away, leaving him stepping further into the smoke and dampness of the passageway. Uncertainly he turned left and there was the door, now he clearly remembered it.

A small chamber was filled with soft light, so unlike the hard blaze of the torch. And in the middle of the room there stood a golden goblet with a rose in it. Somebody spoke gently to the man in an unknown language and he stood listening for an eternity, until the voice stopped.

A dawn had already begun to tinge roofs with gold. The young knight woke up abruptly in his cellar. Something calm and happy had been in his dream, but he forgot about it soon and began to dress himself, absent-mindedly shaking the soot, as if emerged out of nowhere, from the sleeve of his crusader tunic.

A light-weight and mostly undyed undertunic was a traditional undergarment worn by men during the Middle Ages. While it was forbidden to the Templars to wear hoses or long gowns, fashionable in those years among lay knights, the templar tunic of proper length was included in the crusader’s outfit.

Our knights templar tunic would be approved by the Order’s rule. Made of natural cotton fabric, loose-fitting, with no excessive decoration, it can be used as an undertunic with almost any medieval costume. The length of this knight tunic is just below the knees – not too long, not too short – and a front split on the hem ensures easy walking.

By default the templar tunic comes as new-looking, but it is also available with an artificial aging option, where details of real well-worn Knight Templar’s clothes are reproduced, including crumpled fabric, rust stains, cuts and rips received in the Crusade battles.

The knight tunic is produced as a made-to-measure item, so please do not forget to specify your measurements in the order form.

The belt, pants and boots are not included but available separately in our store. 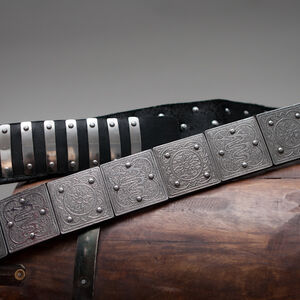 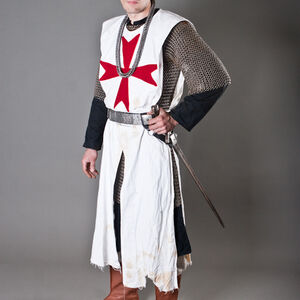 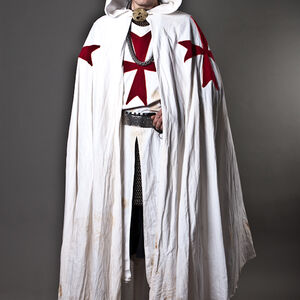 Crusader cloak with hood and crosses 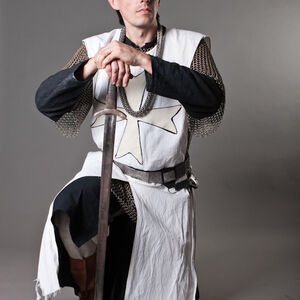