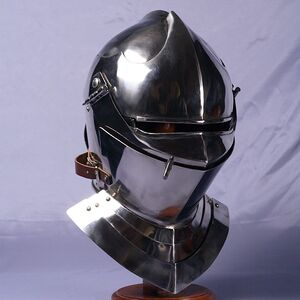 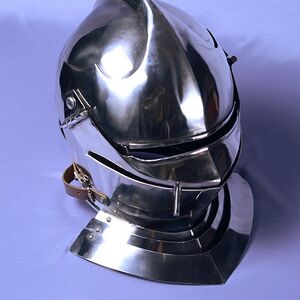 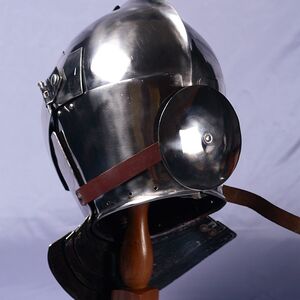 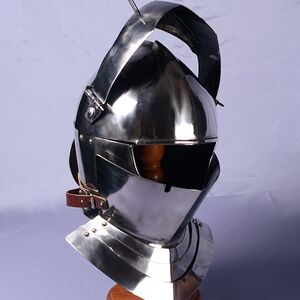 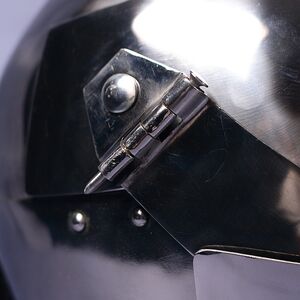 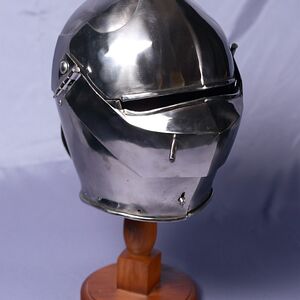 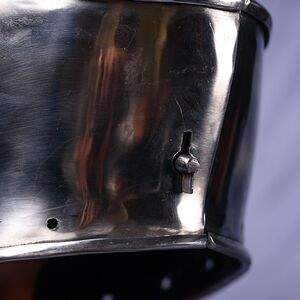 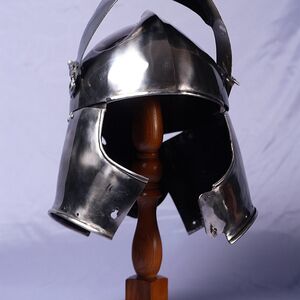 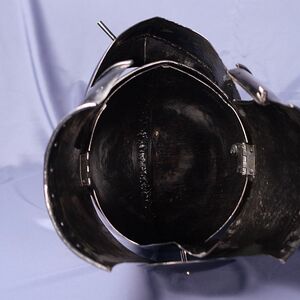 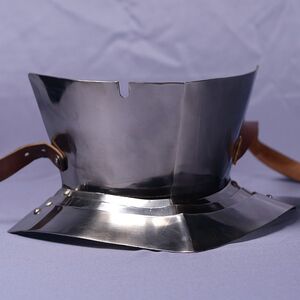 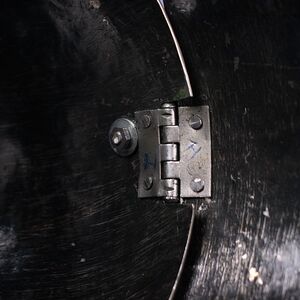 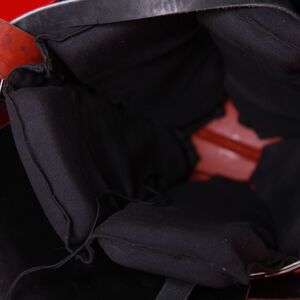 In the XIV century Italy became a trendsetter of armor fashion in Western Europe. Italians were the first who dared to dress a knight in fully-enclosed plate armour, and created a Milanese armor, built of the large smooth rounded plates covering almost the entire surface of the body. The main feature of this style of armor was the knight helmet of a completely new type - Armet Helmet.

The bulk of the design for this model came from the Italian armets of the second half and late 15th century, the strongest influence came from an original "armet a` rondelle" dated about 1475 from the Metropolitan Museum of Art. However, we didn’t intend to make an exact replica, rather to create a knight helmet that we feel would look in its place in XV century Europe.

Semispherical skull of the helmet rises to a slight peaked comb and extends at the back to form a distinctive narrow tail. There is an additional plate on the forehead, designed to reinforce this point and forming the lower part of the sight slit. Сlassic pointed visor of the helmet, named "sparrows' beak", is fitted with the external pivoted hinges and equipped with a pin on the right side, that enables the wearer to raise the visor for more air or to be recognized.

During the 15th-century armet knight helmet was characterised by the unique design of its sides - they are inner hinged at a point just over the ear and closed below the bottom edge of the visor at the front. The armet's cheek plates hinge outward to allow the helm to be put on and off, and secured with a peg that fits into a hole at the front and almost meet at the rear. Face opening and bottom edge of the cheek plates are trimmed with an outward turn.

The next important feature, that makes the armet very well suited for jousting, is an addition wrapper plate, that fits to the front of the armet and provides reinforcement for the lower half of the face. The wrapper includes the articulated overlapping plates that extend downward to protect the throat. It is of all 14 gauge mild steel construction, except the throat plates which are from 16 ga.

The helm is complemented with a disc-guard (rondell) and a moulded peg placed over the back closure. The rondell was a common detail of the armet helmets starting from the 1440s and up to the first decades of the 16th century. Obviously, there are no random pieces among the armour harness: the rondell protected from cutting off the leather straps as well as the rear joint of the cheek-plates.

Originally this medieval knight helmet can be used for any purpose - fully assembled with visor and wrapper for tournaments, or w/o wrapper as combat knight's helmet and w/o visor in dismounted combat. Due to the excellent technical qualities, the armet is absolutely essential to a fully armored heavy cavalryman who tourneys in a jousting contest and is also suitable for all other kinds of combat reenactment activities. The standard features of the helmet meet the armor requirements of the leading international living history groups, such as HMBIA (BotN), WMFC, upgraded to 14 ga stainless can be used for IMCF combat as well. Armet helmet works perfectly with the Milanese style cuirasses, such as Paladin Etched Stainless Cuirass Breastplate. There is also an etched version especially for those who believe in both functional and beautiful armor.

Chin strap with a drawstring and toggle

Safety disclaimer: Sword-fighting and fencing is a dangerous sport. Fencing, historical fencing, medieval reenactment and martial arts as well as other related types of activity, are inherently connected to a certain risk level of injuries or death. The Company declines all responsibility for any traumas or harm done to oneself or to the third person, along with any material or consequential damage, impaired during the products usage. We admonish that all acts with armour, weapons or their components have to be performed before designated person who is responsible for safety of the particular event and accredited to supervise armour and sport weapon conformance to the event’s standards. 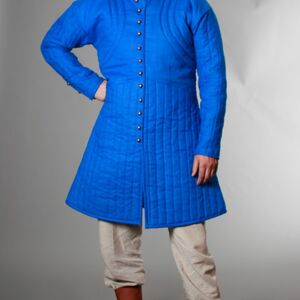 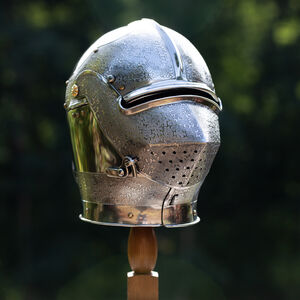 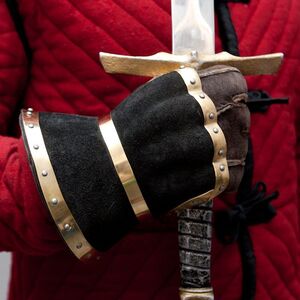 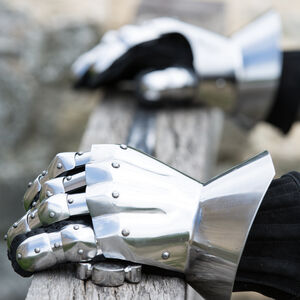