Pre-Raphaelites Brotherhood — artists and poets, critics and designers, the whole new artistic movement appears in the middle of the XIX century as the response for the "academic" and mechanistic nature of their time.

“The art is dying”, — these fellas have said: William Hunt, John Millais and Dante Gabriel Rossetti, -- followed by  William Rossetti, James Collinson, Frederic Stephens and Thomas Woolner formed the seven-strong "Brotherhood". Their ideas were supported by Edward Burne-Jones, William Morris and later -- by John William Waterhouse and Edmund Leighton. The wanted to return to the point in art before Raphael have introduced his "academic style" in painting (thus the name). They changed the painting technique, the pigments and colors, changed perspective, changed the relationship between the artist and his model, they created the whole new subject of painting... yes, they have created the first fantasy!

One may not believe now, but they are truly wanted to live in this fantasy. "Machine production is killing the beauty of the costume", -- the very costume of the Medieval time which was the exclusive creation of artist, not mass-produced factory "product". To counter mass-production William Morris created "Arts & Crafts" designer union -- first of its kind. Reconstruction or stylization? The spirit or the letter? Does it matter? Being in love with present -- that's what it is! It's like Dante Gabriel Rossetti observes Botticelli working, like Edward Burne-Jones painting red-haired models and surreal dresses of Lucas Cranach. Together with Pre-Raphaelites we are finding themselves in their Universe, the Universe of the painters and their models.

Taking as a start the dresses of the past time, their fable spirit and juiciness of color, Pre-Raphaelites are recreating them taking details into attention, stitching together centuries, styles and traditions, and implementing the spirit of painters of the early Renaissance. They were studying scientific monographs on the history of the costume to make everything right. And everything IS right on their paintings, while Renaissance painters were painting the dream, fairy tale, mixing real and non-real dresses and hair-styles, imaginary wind in non-existing clothes -- the clothes which could not be woven yet and will appear only in XIX century. Were the Pre-Raphaelites cinematographic? They ARE future cinema! Each painting is a blockbuster implemented in the single frame. The frame is a code. To learn what will happen next and what already have happen "in the previous episode" one have to study the painting and the painter himself. But it is and "interactive blockbuster" and everyone will receive a different answer for themselves. This is the line stitching XV-XIX_XXI centuries. Or it is a strange artist workshop leaving which we are finding ourselves on the street of not-yet-clear century but the music is already here... Edward Burne-Jones, "The Princess Sabra Led to the Dragon"
(cc) By Perl at en.wikipedia [Public domain], from Wikimedia Commons 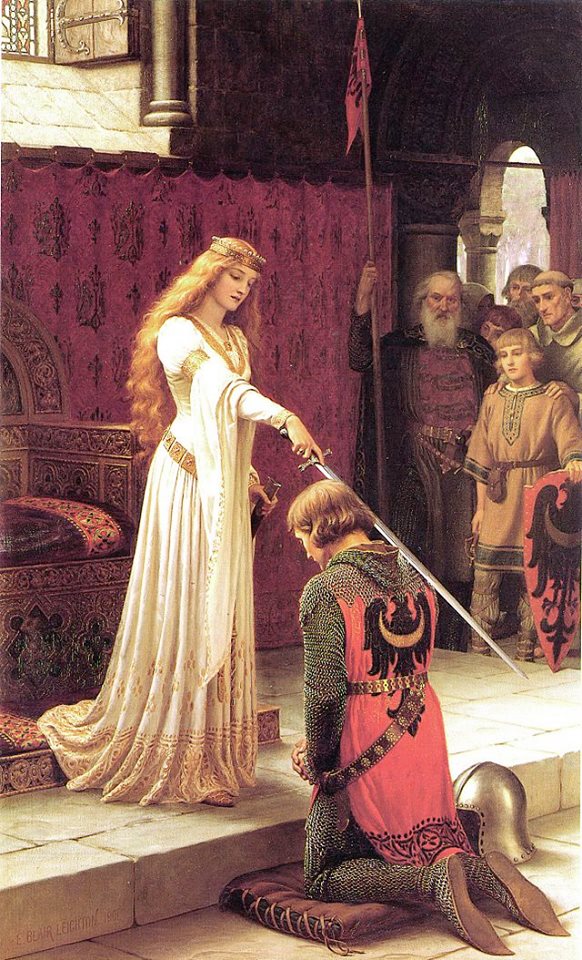