Some people know what Bicolline is, some don't, but it's basically a dream place for any LARPer, located north to Montreal, Quebec, Canada.
I've never seen anything like this in the World. I've seen larger events, for example the SCA’s Pennsic War in PA, United States – which ArmStreet has being attending for the last nine years – but I've never seen a setting as beautiful as Bicolline. It's a gated LARP campground with more than 300 permanent buildings, which hosts a dozen smaller events each year as well as a great week-long campaign known as Duché du Bicolline. Just to reiterate in case you missed it, Bicolline has 300 permanent (!) buildings which belong to different guilds, teams and other fantasy entities. This includes a hotel, several taverns, restaurants, pubs, as well as gear and clothing shops. You’ll also find a large battlefield with a wooden castle facade for certain battles – some other battles also take place around the battlefield in woods and different types of terrain.
There are also dedicated places for specific activities like a Trollball playground, a fighting pit, and different types of very special buildings including a Pirate Ship between the Old and the New Town. 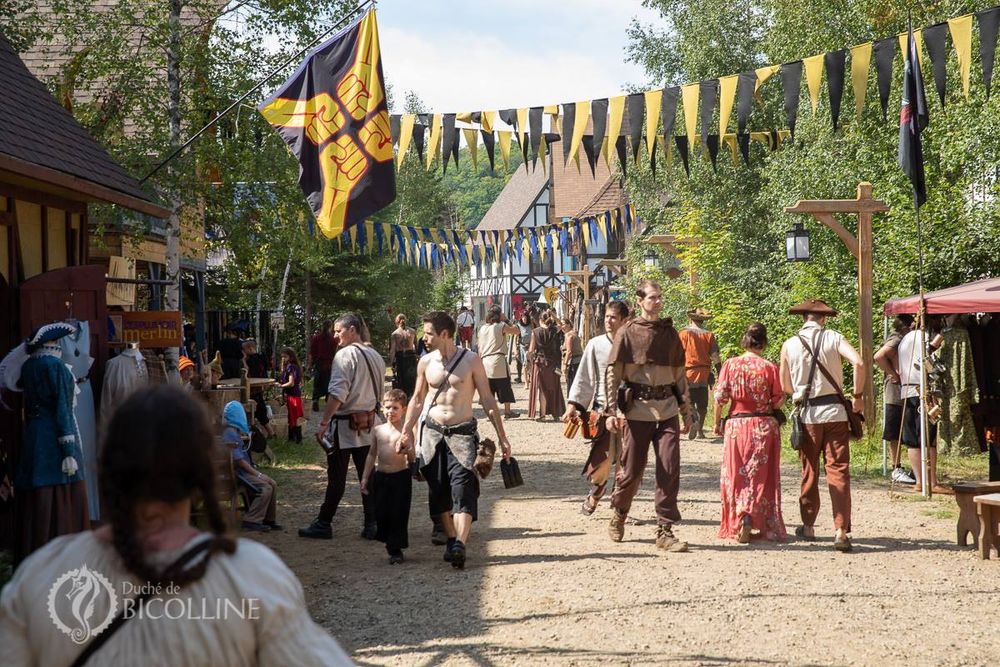 When we came to Bicolline for the first time a year ago, I was overwhelmed with all sorts of realistic details: from horse carts which circulate between Bico's two towns, to all types of fireplaces, lanterns, decorated trees, shields proudly placed in front of the fighting guilds buildings and even blood-colored puddles around most crowded places where fights and murders happen. This place is undeniably detail oriented.

This year I was the only representative of ArmStreet at the event. I had the pleasure of being invited by one of the most respected LARP groups, known as Ordo Cervi, run by Jordan Gwyther and his group, The Voyage North. They also have another camp known as Marchwardens. The Voyage North is a project created by this amazing team of people to help enthusiastic LARPers from all over the world go to Bicolline and have the best possible experience. It’s a kind of an “all inclusive” experience where you get to be right there in the middle of all of the action, with one of the most prominent LARP groups. Bicolline is very overwhelming and much more complicated when you’re travelling alone, so The Voyage North takes the anxiety and uncertainty out of the experience by promising a great time for those who haven’t been before and aren’t entirely comfortable speaking french... Ordo Cervi is the biggest guild at Bicolline and the largest English-speaking conglomerate as well! Don't forget, Bico is in Quebec so the main language here is Québécois French.

This year we made guild tabards for Ordo Cervi and the Marchwardens, so I wanted to get feedback and impressions for further improvement of our collaboration with The Voyage North and possibly other Bico guilds. Long story short, I decided to go with TVN as a regular member of Ordo Cervi and look at how it works from the inside. Best decision ever!

You can get all necessary information on their website, prices, dates and photos and videos from previous voyages. If you’re wondering if it’s a great experience, the most telling thing I can offer you is this: I’m absolutely going again next year! 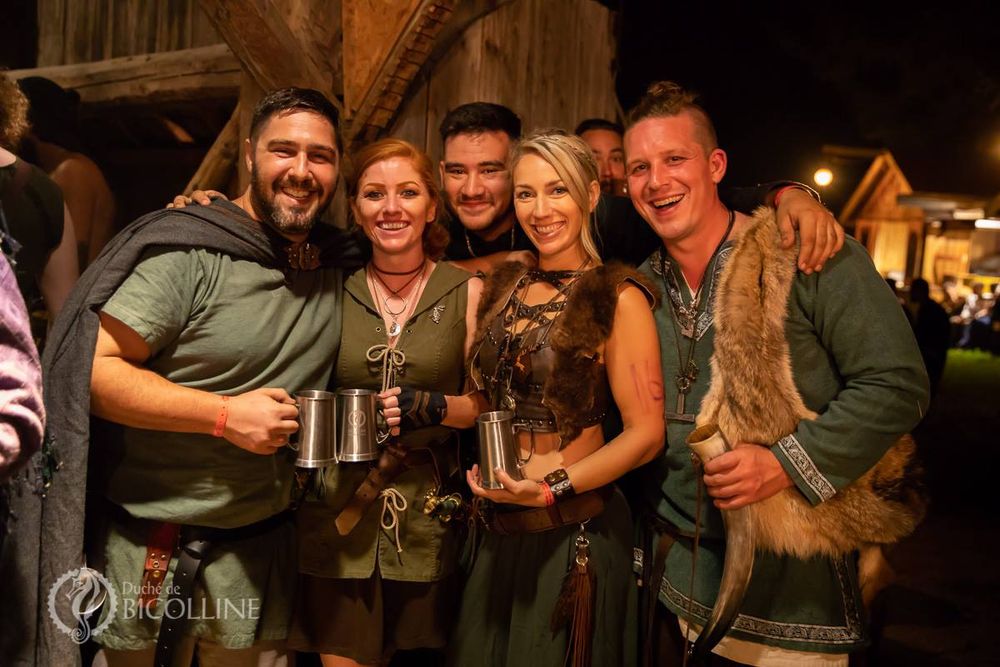 With TVN you have to be in Montreal airport on Sunday morning in order to catch the bus with your other new Ordo friends, or you can go straight to Bicolline if you’re traveling by car. Normally check in at the event is open from 9 a.m., Sunday. There is a small unofficial pre-party in Mariott in-terminal hotel on Saturday, so people who stay there might get a pint or two and start making new friends. I was staying in downtown Montreal as I arrived from Pennsic on Friday and wanted to chill a bit and take a look around, but I took a bus to the airport on Saturday night to see people.

I’ve been in Ordo Cervi camp before so it wasn’t a surprise, but I noticed that this year we had some new improvements such as nice lanterns next to every tent as well as dotted around the camp to give more light at night. Ordo Cervi also provides each member with guild tabard (this year tabards were made by ArmStreet), plus there are some Ordo weapons you may use, mostly tower shields and spears. A lot of people are really passionate about making Ordo Cervi a great team so they spend their own time and money to bring some extra stuff for other members. 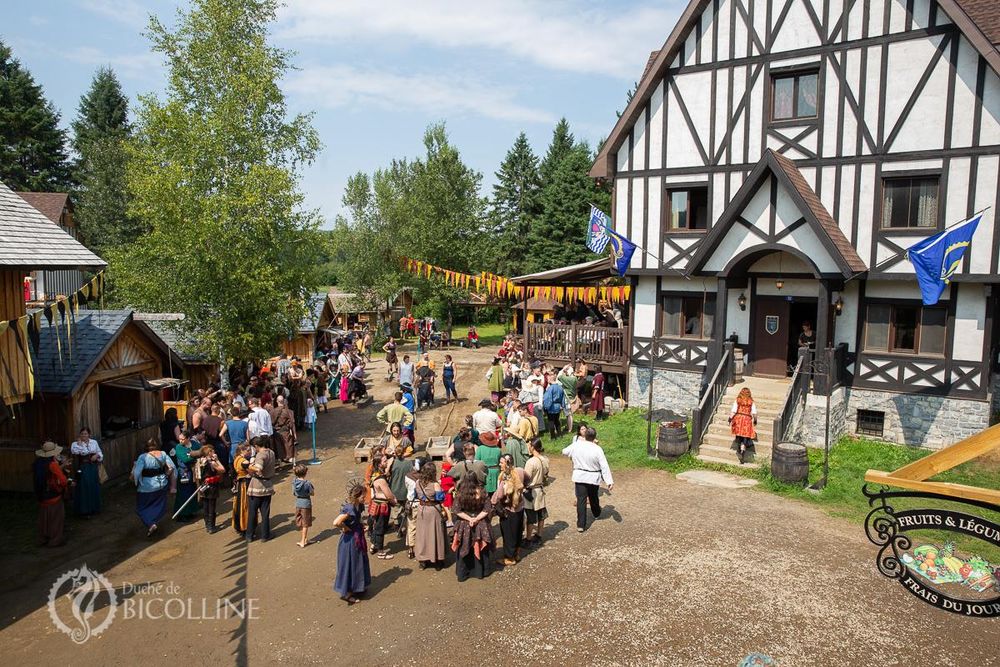 Bicolline takes decorum very seriously. If you’re traveling by your own and don’t have a period tent you will sleep in the non-decorum camp far away. No cell-phones or cameras allowed for open use. For emergency calls or internet you may obviously hide in your tent and you may sneak out your camera to take some pictures, but overall no visible use of electronic devices is allowed. If you go to the river for some bathing you need some not-too-modern pants or period braies (I used this over regular swimming pants). Everyone appreciates to extra effort to hide the mundane, for example, if you buy a tin can of beer or soda in a shop, pour it in your mug, or wrap it with craft paper or put it in a clean sock. You’ll probably be amused to know that one of the most popular ways to carry your small belongings is socks, or small fabric bags or just pieces of fabric to wrap them around! A mug and a small bag are important necessities at Bicolline.

The basic requirement for you is to have your character and stay in-character all the time. There are no strict regulations on role-play - people mix in-role and regular conversations but if someone is talking to you as a character you’d better stay in-character too. The whole world is very mixed so all types of history-based characters are allowed as well as different races - from what I saw, there are at least elves, goblins and dwarfs. 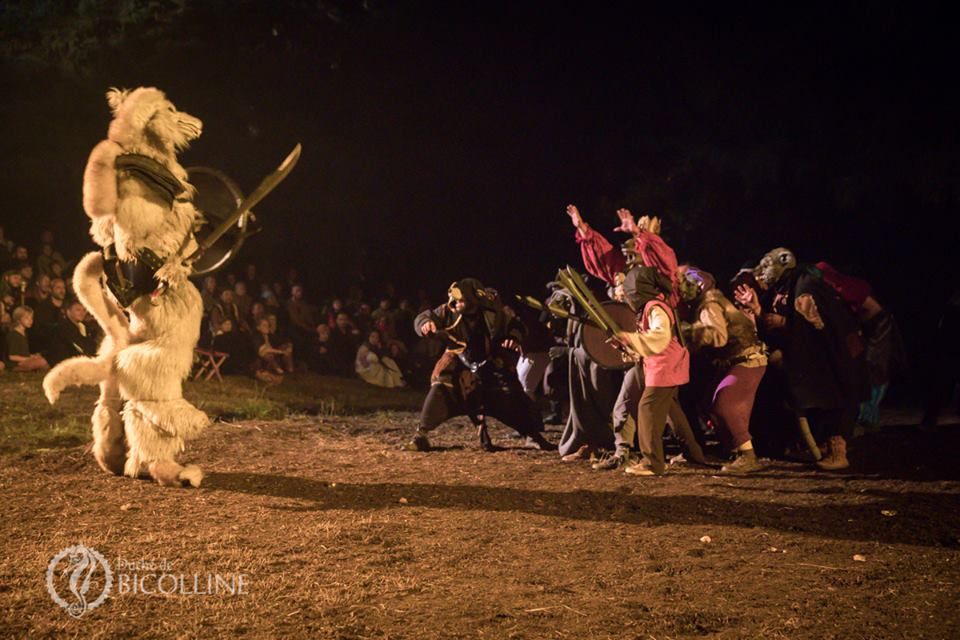 Combat rules are very simple and this is what makes them great. One combat-point per person as a baseline, leather and mail give one extra point, metal gives two. No hitting in the face or groin area, otherwise everything - including your head - is a target. Legs and arms are a big target, and if you lose all hit-points on your arm or leg you can’t use that limb anymore. Cannons, ballistas and monsters kill you with one touch, including elements of clothing or armour, as well as your weapon (!) 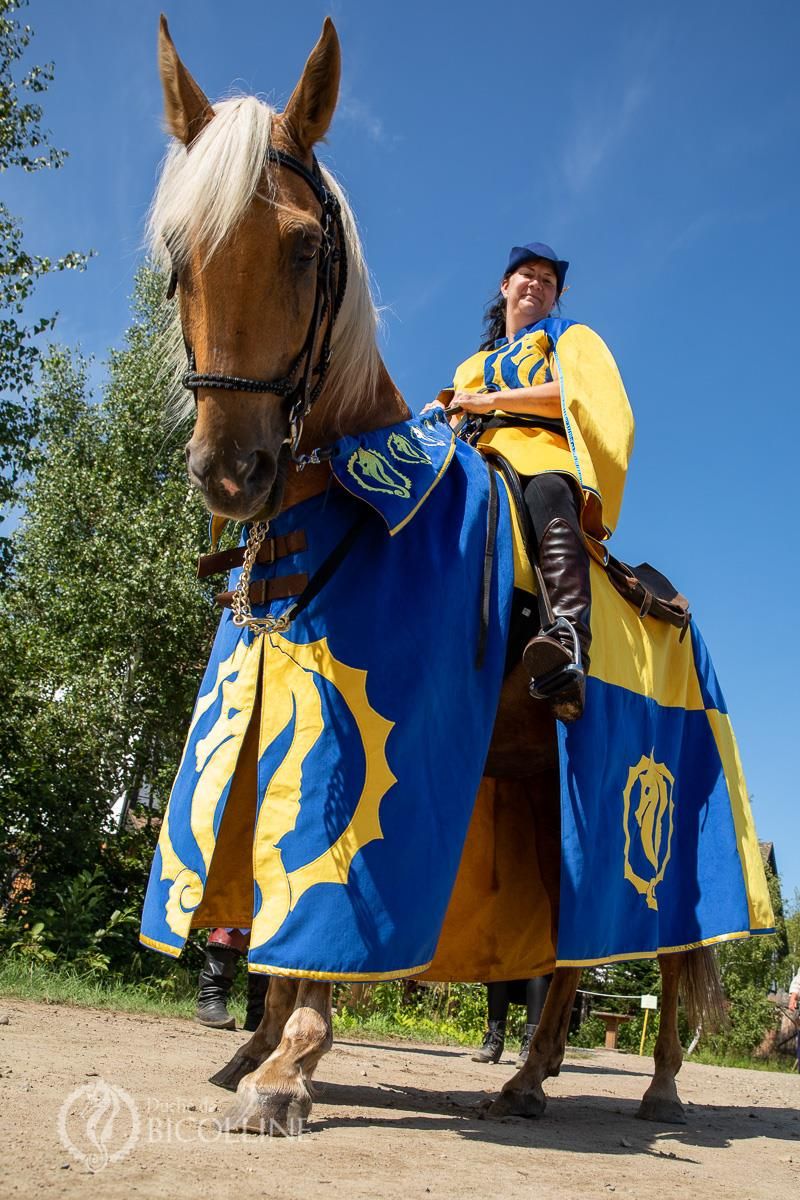 People normally do their best to play fair and there are a lot of Marshalls to support this. Marshalls wear yellow-and-blue, so don’t choose this combination for your garb, no matter how much you love Ukraine! I really loved to fight at Bicolline. Battles are long and you have many chances to fight against different people, get into different situations and die multiple times. Thousands of people on the field makes for a great picture, plus I, for one, really enjoyed following people who were in charge for the army management, as you rarely have the opportunity to see and participate in a medieval war where not only tactics, but strategy, support and long-term dynamics, matter.

Trollball is now my favorite game and you need to know more about it. It’s a team game with approximately 12 people in a team and 7 people on the field at the same time from one side. It’s a tactical game which includes fencing (one-hand ultra-light swords, 110 cm) and group tactics. It takes place on a field approximately the size of a basketball court, with one barrel on each side of the field (that’s where you have to put a troll head to score). There are 5 swordsman on each side simultaneously and two healers. Healers can deliver swords from killed players back to replace a player with another one - that’s why you need more than just 7 people to play.
Trollball is a super popular game at Bico, there are almost-professional teams and it’s a great group exercise for sword-fighters. Also it’s extremely fun!

Clothing regulations are very loose at Bicolline. Keep it “decorum”, keep it period and that’s it. I’ve seen all types of costumes - from ultra-fantasy monster foam armour to viking costumes to pirate outfits to very historically accurate middle-ages clothes. So, you have a great opportunity to play fast and loose with your character and create different variations of costumes. 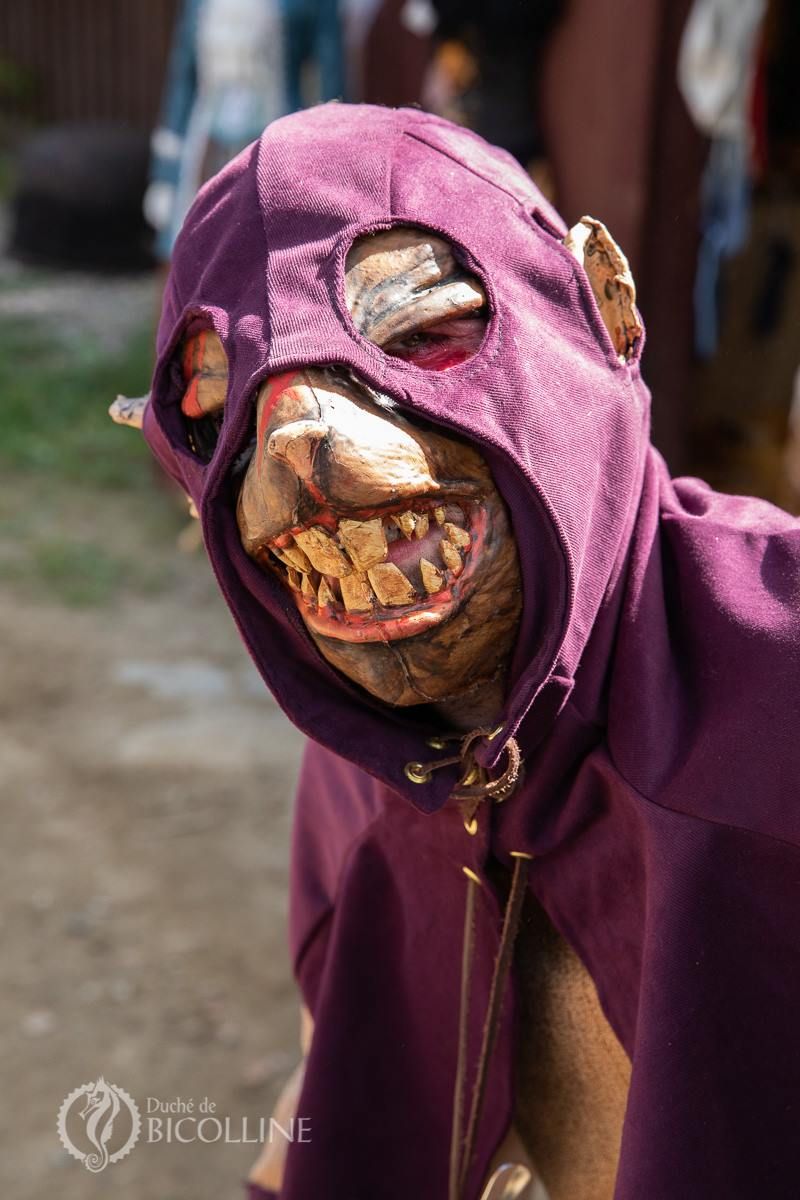 Armor is also a subject of creative approach, from fantasy elven looks to very period knight kits. Just keep in mind that foam doesn’t count as a protection, so you need real leather or mail to get one extra point and metal armor to get two. Also, it’s hot and battles may be long so take care of yourself and be ready to spend several hours running and fighting in your armor. Weapon - all regular types of latex weapon are allowed from major manufacturers, as well as self-made weapons. All weapon are subject to safety inspections, so make sure your weapon is reasonably soft, as pointy elements will be a subject of precise interest of Marshalls so make sure there is no way that inner core will go through your latex or foam cover and injure someone. Also, keep in mind that people are trying to make their armour as lightweight as possible so make sure you can easily operate your weapon, there are a lot of good fighters at Bicolline and even if you are a shield-wall heavy-infantry fighter there will be moments when you will need to change your focus and your position really fast. Archers kill spearmen, spearmen kill shield users, shield holders kill archers, artillery kills everyone - that’s the game Bico plays. 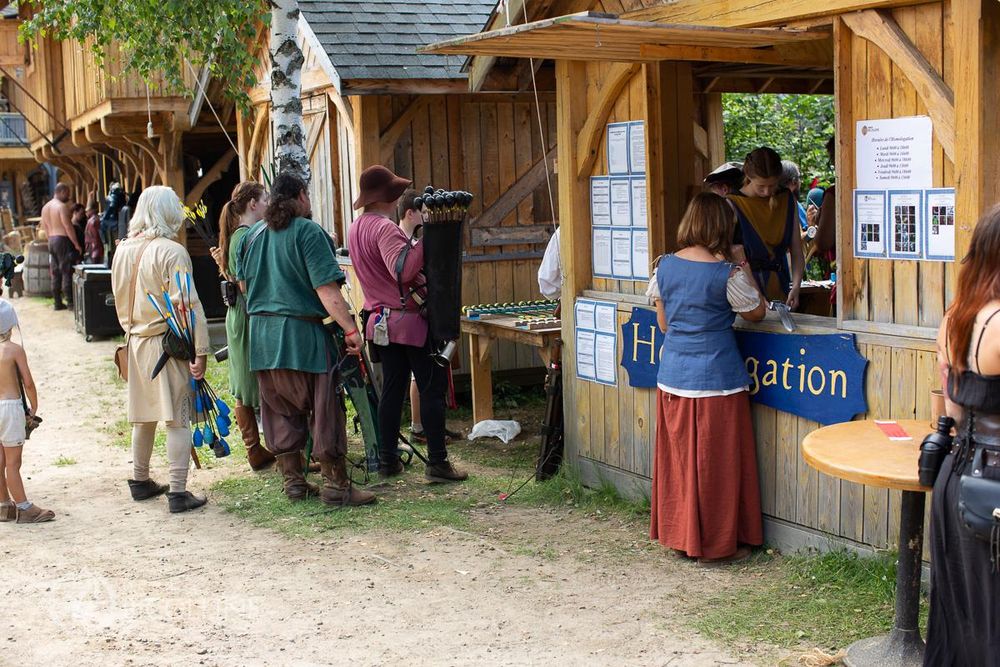 I was really inspired to be a part of Ordo Cervi and seriously enjoyed Bicolline as a member. There are so many things I didn’t try, so Bico is definitely in my list as a personal vacation next year and it is also in a list for ArmStreet - we discussed framework with Bico representative who is responsible for Merchant area and we’re going to have a tent at Bico next year. 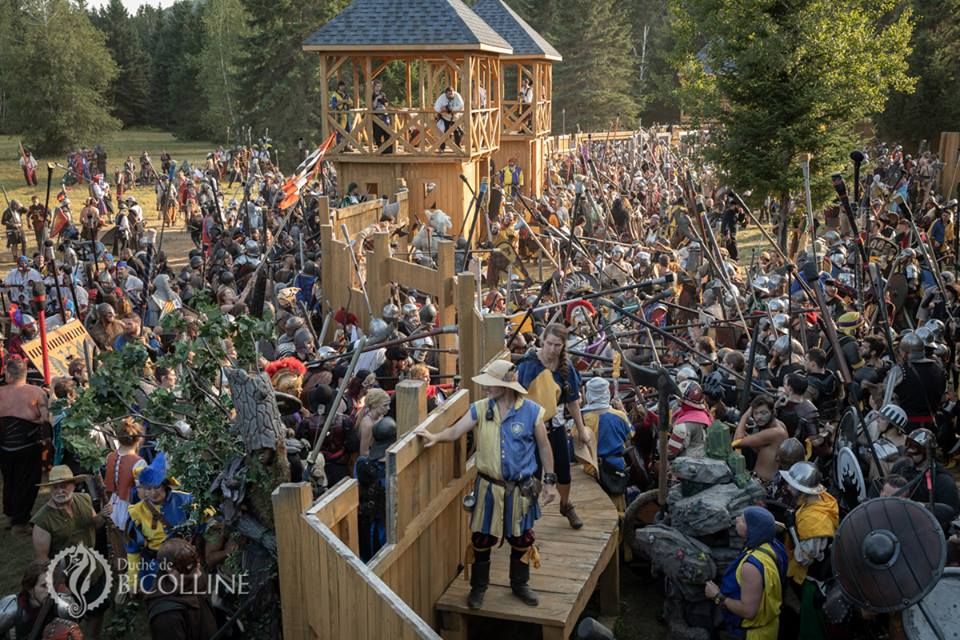